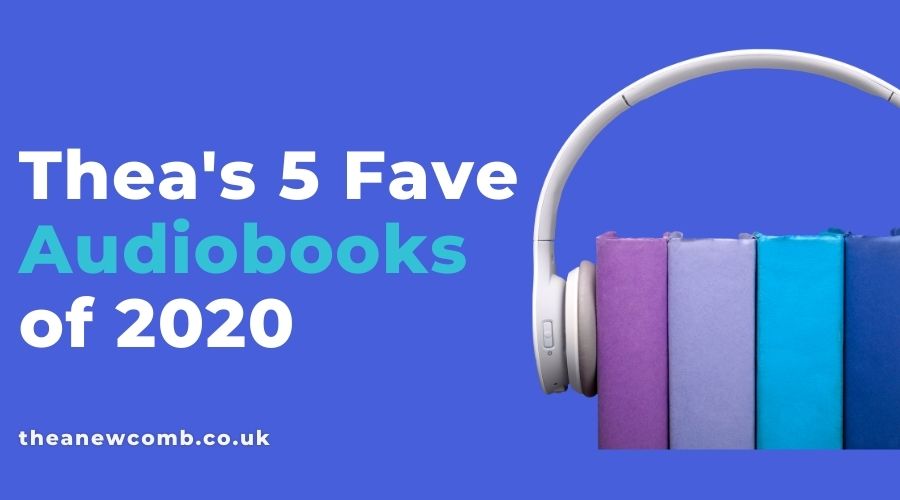 Let’s talk audio books. Listening to other people’s words has been a constant source of communication and connection for me the year that was 2020. I thought I would share my 5 Fave Audiobooks. I have listened to a lot this past year or so, and thought I might break it down into a series (as there have been a lot). Note this post has affiliate links.

I think it’s fair to say that nobody has been completely unaffected by Covid-19. While for me personally, it hasn’t been a year that was any better or any worse than any other year of my life, it’s certainly has been an adjustment. Like most people, my work life has changed pretty dramatically. Most of my income used to come from in-person workshops where I would get to meet Scottish businesses and professionals by the dozens each week. Now I still do that, but it’s online and the connections are virtual.

One of the things that has helped me through these unusual times was walking along the river and playing these audiobooks- whether fiction, business, autobiography or personal development. Here are a few of the ones I recommend and a little bit about them in no particular order.

Depeche Mode fans will recognise the title and they are one of Richard Blade’s favourite bands of all time. Richard Blade is a name that will be recognised by anyone who is, of a certain age, who grew up (especially in California) listening to alternative music.
Originally from the south of England, Richard blade is a DJ, TV host and sometimes actor. I first came across him when in high school, I would rush home to catch his TV show so-called MV3.

In his book, he takes the listener through the journey as a club DJ, at college through European clubs all the way out to Southern California as he seques into radio…eventually finding his home on LA’s legendary KROQ. These days he’s on Sirius Satellite Radio.

What I Liked About It

I loved that he narrated his own book (even though his Mid-Atlantic twang kind of bugs me). I also enjoyed how it features some of the voices of the people he’s telling stories about. I marvel at his ability for specific dates – especially in the early days of his life and wonder if he kept a journal. There are a lot of hours on this audio book and it took me a few months to make my way through but listening to it was like talking about music with an old friend. It made me remember seeing many of the TV shows, concerts, events etc that he talked about. So it’s like a little musical journey down memory lane.

I also feel like there were many similarities in our lives not just radio but in relationships with our respective supportive fathers and just general experiences. He swapped the UK for California. I did the opposite. To say it is struck a chord would be an understatement, and that is why I recommend this book to anyone who’s interested in ’80s alternative and new wave music especially or in radio or who simply likes biographies.

I have made up my own genre type for this particular book which was recommended to me by my photographer friend Kerstin. This book is about attraction of wealth, money blocks and simply being a financial badass. Denise is a a successful Australian author with a few books and online courses aimed at women who want to take control of their finances.
Much of what was said I already knew, and believed, but there were a few things that really stood out for me. Over all it really left a valuable, possibly even life-changing impression on me.
Firstly she talks about unclaimed money. This is money that we have just lying around our house (could even be gift cards or vouchers) or in an online account. She suggests that you keep a money log on a daily basis which you update as money comes in.
So I created a spreadsheet that had balances from my business account, current account, 2 PayPals, savings accounts and a few other online accounts like Quidco and Younique.

The point of doing this is to realise how abundant we actually are. Honestly, until that exercise, I had absolutely no clue what I had. Denise’s assertion is that the universe will not give you more, if you’re not paying attention to what you’ve already got. That may sound a bit spiritual woo woo for some of you, but I completely agree with her premise.

The week that I was doing it, I kept remembering other places I had “unclaimed money”…Like the post office cash card which had some Euros on it from my last trips to Berlin and Belgium. I have a little inheritance in a credit union account in America.
While I am certainly no Rockefeller, the unclaimed money log did make me feel very abundant.
The Price is Right!
Another thing I really liked about the book was her discussion about pricing your services. she suggest that you never ask people what you should charge because people will often complain even if you just charge a dollar (or a pound).
You are effectively having to deal with their money blocks.

I liked that book so much I even went on to to purchase one of the books Chillpreneur. Some overlap but it’s decent too.

Early on in Denise’s book Get Rich Lucky Bitch book she quotes a study by psychologist Richard Wiseman in his book the Luck Factor. I liked the sound of the case study so much that I bought the book on that basis. Richard is another Englishman who was educated in Edinburgh and is now based in Hertfordshire where he has his own academy to study luck.
I consider myself a lucky person who finds the good in everything. Throughout his book he sites studies that he did where he would study both people who claimed they were lucky and unlucky.
In the majority of the cases, the experience of the people turned out to be self-fulfilling. The people who believe they were lucky did attract more or good fortune and opportunities toward them. The ones who felt less lucky attracted more bad luck. One of his studies would be to leave a five-pound note in a person’s path to see if they noticed it. As you would expect, the lucky people did. Strangely on one of my daily walks, I was listening to this audiobook, and when I returned home there was a five-pound note on my walkway!
Since reading the book I have also won the lottery many times. No, I am not a millionaire yet but it’s coming…
The Luck Factor on Amazon UK
The Luck Factor on Amazon USA

Anyone who knows me, knows that I am a huge Gilmore Girls fan. I have stood in front of their Stars Hollow house for a selfie! I have watched the series several times now. In January 2020, my friend Kristen gave me Lauren Graham’s autobiography which I read on the flight back from California and loved it.
With an audible credit burning a hole in my cyber pocket, I decided to purchase Lauren’s fiction book Someday, Someday, Maybe.
It is read by the actress and suspect that it is loosely based on her own life starting out as an actress in New York. If you like the Gilmore Girls fast talking dialogue, then I would recommend this story (even better at about 1.8 speed!) I think I got through this book faster than any other book that I have ever listened to and I listen to most of them at about twice the speed.
It was definitely a fun one to walk around and listen to her quirky characters thought processes and anecdotes.

The fifth is last but not least in my fave audiobooks of 2020 and it’s a cracker. I really enjoyed listening to this book while out walking in the spring and summertime. Though it’s a slightly older book (2013) I felt it’s just as relevant today as it was when it was released. He cites six main reasons why things go viral. It’s due to social currency – basically the reason we share anything online is to make ourselves “look good” (cool, hip etc). To get a recap of some of the most salient points, have a gander at this: video.

Those Are Mine. What are some of Your Fave Audiobooks of Late?

Until next time… xo