So last week, just before I went to deliver some SEO training in Clydebank for three hours, I got the call from a lovely Scotland Tonight producer asking if I’d be willing to come in to talk about Facebook’s 10th birthday.

What ran through my mind at that very moment was – “my brain’s having a fuzzy day, the last thing I want to do is go on Scottish Television and make an ass of myself…” – but what came out was “um, sure, sounds good” (or words to that effect)…

Normally, I like to be at least a little prepared before I do a radio or TV interview – but I barely had time to slap on a bit of make up and straighten my hair a little before heading out to work!

Now, I love being asked to do the show. I love actually doing the show. But the run up to being on the show is nerve-wracking, and quite honestly the aftermath sets my inner critic into overdrive, “Oh my Gawd, look at my hair! It didn’t look that bad in the make up room!” or “Geez how much weight does a camera actually add? Fifty pounds???”

Vanity aside, perhaps the most disappointing thing for me for me was that I felt, due to the aforementioned fuzzy head, that I didn’t really answer the questions that host John MacKay asked, in the way I’d like to. So now, here on my very own blog, is a chance of what we Americans call a “do-over”. 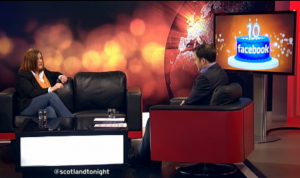 John mentioned that I’d tweeted earlier that day that I “love and loathe Facebook in equal measure”, and he asked what I meant by that. Well here’s what I meant:

I love that with a few clicks of the button I can see what’s going on in my family and friend’s lives – wherever they are in the world.

Well, most of them,…as I do have a lot of friends who simply choose not to be on Facebook, (smart cookies). That’s awesome. In some ways I do wish I could come off it completely.

Anyway, so, if I want to see their holiday shots, wedding photos, gig snaps, or their new born child’s first pics – I can. I have that choice.

Additionally, I love that I can group my friends and family into categories – “close friends”, “acquaintances”, “music”, “Glasgow” or “Bay Area”. I do and post directly the individual lists semi-regularly.

All status updates are not equal. Not all content is relevant to all friends. So I like that I can sometimes segregate for relevancy.

So those are  few things that I love about Facebook but then there’s,…

The altogether less attractive sides of FB are really the “annoy the crap out of me” posts – where people brag, attention seek, try to be so controversial or cryptic…

Now, I am not saying I’ve not posted a few of my own in my time (in fact, I posted one on Christmas that I regretted just hours of posting it) – but really, in my opinion, Facebook can simply highlight our narcissistic, opinionated, and voyeuristic tendencies. It can be an excuse for not meeting up because we don’t need to – we know everyone’s news – it’s all there on their timeline.

I think, for me personally, Facebook can make me feel incredibly “connected” to my family and friends at times, and yet completely “disconnected” from them – in almost equal measure too.

I had an experience, recently, when someone I thought was a “friend” (certainly at least of the Facebook variety) visited from half a world away. This person and I share friends in common, and came to Glasgow and posted from here – knowing full well we share friends in common. Really? Come all the way to Scotland, to my city and not reach out to even meet for a tea? (Only then did I check and find I’d been unfriended. To this day, I have no idea why).

In spite of this person not being a close friend, I still can’t begin to tell you how hurtful that experience was for me. There were other slightly less dramatic instances of things like that going on before and after that which caused me to limit my Facebook activity altogether. Some people are just more sensitive than others.

Loving shots of couples to a singleton or parental shots for someone who’s just lost a parent – can be a minefield for the sensitive among us. Posts can be hurtful to onlookers whether we mean it to be or not.

Not only can they be super annoying (see 7 Ways to be Insufferable on Facebook ) but Facebook can simply be bad for our health! Even the Economist said so!

From a business standpoint (my business is often training small businesses how to use FB to promote themselves), I don’t like it due  to it’s ever-changing goal posts (which I recently blogged about over on my Glatitude blog). With Facebook claiming there are 1500+ potential news stories that could feed our streams daily, it’s getting harder and harder for page owner’s activity to be seen.

It’s gotten to the point in a business owner, who is brand new to social media wanted to go on one platform – Facebook is no longer my first suggestion. Well, depending on the business of course. I’d recommend

When John asked about the Privacy issues of Facebook, I had stated that they’d made a change to our photo uploads being automatically “public” – I, of course, meant our profile pictures. So each time you upload a new profile picture – check your settings. Grrr. 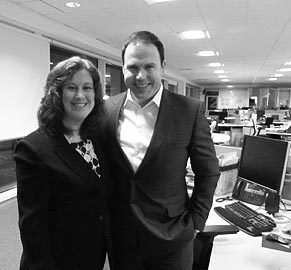 Is Facebook cool? No, not really but I don’t think it necessarily needs to be, as long as it remains a relevant option for us to keep in touch with our family and friends – who really cares if it’s “cool” or not? Though my time is often limited on Facebook to maybe ten minutes day, and my interactions are more often than not done in private, it’s a platform I will continue to use, to love and to love in equal measure.

What about you? Do you Love or Loathe Facebook? How often are you on it? Do you manage a page? Have you noticed changes in your insights since the Dec 2 algorithm changes? Quite a challenge isn’t it?