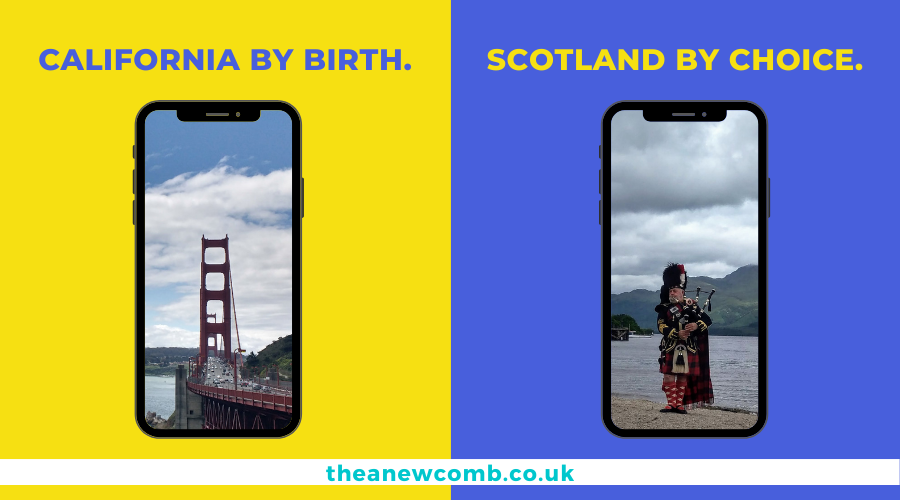 In Scotland by Choice

Today’s is a more personal post about how I live in Scotland by choice. It’s a little tale of how I ended up here in Bonnie Scotland and why I stayed. Twenty nine years ago today I landed at Glasgow airport a newlywed. Having had a whirlwind marriage just two weeks prior, I landed in Scotland feeling awkward and apprehensive. I’d only been to Scotland for two days in 1989 and yet to even meet my newfound family (a father, mother and brother).

The first thing I noticed about arriving in this country, in June, was just how light it was late and again early. In other words, it was only dark for about four hours (11pm-3am) which was strange to me.

For the first few weeks, my husband and I lived in deepest darkest Lanarkshire – until we were able to find a two bed flat in Battlefield. (Wow, I never realised how apt that name was until this very moment).

We were both young (himself even younger than my 24 years) and probably had no business getting married. It was more a necessity than a desire on both our parts as there would be no way for us to be together unless we took that plunge. So dive in we did.

A year after moving here, my mother passed quickly. It was so quick that I never even got out to California to say “goodbye” until after they’d pulled the plug. I’d seen her just two month’s prior to her transition (or as she called it “graduation”) and though she didn’t feel great, I had no idea she was flooded with Cancer. To my knowledge, she didn’t know either.

Sometimes though, life changes that quick. The last memory I have of my mother was her standing in the street on Capitola Ave – as I looked at her reflection in my rear view mirror. I remember waving animatedly as I drove north in my little Datsun roadster, topless (the car, not me).

It’s kind of a sad memory but also not a bad memory to have. It far beats the one my sister had, bearing witness to the fear on my mother’s face as they wheeled her off for surgery that she never really came back from.

The husband was supportive for a little while and our constant arguments subside, but soon again his patience with me wore then and we were soon back to unhappy, bickering couple as before.

Our marriage lasted just three and a bit years until Sunday it came to a rather abrupt end. Upon arriving back from a weekend away working at Scot FM in Edinburgh, and with a dear friend Fiona from Australia visiting, he dumped me standing by the front door. I can’t be sure, but I don’t even think I’d taken my coat off by the time he did.

Our short fairy tale had ended with something along the lines of “I love you as much as the day I first married you, but I just can’t live with you anymore”…or words to that effect. Honestly it’s not worth going too into detail of our marriage and its demise just now – I’ll save that for my autobiography. Suffice it to say, for me there is no anger or animosity toward him only gratitude remains. I suspect he’d not say the same but that’s OK, it is what it is. He was the reason I ended up here so he had served an important purpose in my life. To be honest, I always wanted the wedding day, but never the marriage. It ended up being that I had the marriage and a day trip to the Justice of the Peace in Nevada (so no wedding).

That’s life sometimes isn’t it though…? Seldom does it go the way we plan.

Me being me, I never do things by half measures. Just as rashly as I had previously married, I speed-rebounded into another long-term relationship as soon as my marriage had ended. The difference between the two relationships was night and day. It was exactly what I needed when I needed it. For that too I am so grateful.

Looking back though, if truth be told, I had no business being in a relationship when I hadn’t even processed the previous one. So when that second relationship ended, after three years again, I had two heartbreaks to recover from. A double whammy.

All those experiences are so last millennium. Death. The death of love, family, friendships and life as I knew it. House movies, job changes and almost no constant in my life – bar Scotland.

More than twenty years later there have many more highs and lows. More loves, more deaths, more jobs and more losses and yet Scotland remains.

Scotland Is my Home

It may sound strange but the longest relationship I have had is with Scotland. It’s true love and a sense of belonging – even though I am technically an outsider. My friends have become my family. My career is my relationship. I love my home. If you had told me, on the the day I graduated university, that I would be married and living in Scotland within a year I’d never have believed you, and yet that is exactly what happened.

Hey if you love Ted Lasso be sure to check out this blog post about Lasso Con!

2 thoughts on “California by Birth, Scotland By Choice”