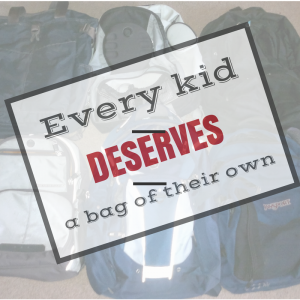 This week I was chatting to someone, who was a social worker for Glasgow City Council, about Fostering children.

It’s something I am interested in (doing), and so I have lots of questions about the whole process…

When I learned that kids are being removed from their homes with their personal items in “bin bags” (black trash bags), I was a little shocked and very saddened. I mean here is a segment of the population, already feeling vulnerable, displaced, and perhaps disposable, and they’re being referred to as “black bag kids“? In other cases, I am told, their stuff is lobbed into a departmental suitcase, taken to the new place and then dumped out, so the social worker can take the case away with her (him). That’s not a whole lot better, is it?

Foster Kids in Glasgow Deserve Their Own Bag

Don’t all foster kids, in Glasgow (or anywhere else for that matter), who are being ripped from their home and placed elsewhere, deserve their own bags? This could be a backpack, rucksack, drawstring bag, carry-on style bag – just something that’s their own.

Well, I think they should have one at any rate, and so does everyone I’ve been talking to about this. You see, once I had this idea, I’ve slowly been reaching out to some women (and a few men) that I know here in Scotland, who I believe would be either sympathetic to the cause and want to be involved, or who might at least be able to supply some names of people they think would be helpful.

I don’t want to say too much just now, but I will expand on this idea more thoroughly very soon, and please let me know if you’d like to lend your time, contacts, cash, ideas, or skills to the cause. It’s at the very early stages just now – but I’d hope to get something in place for Christmas – which is not too far away!