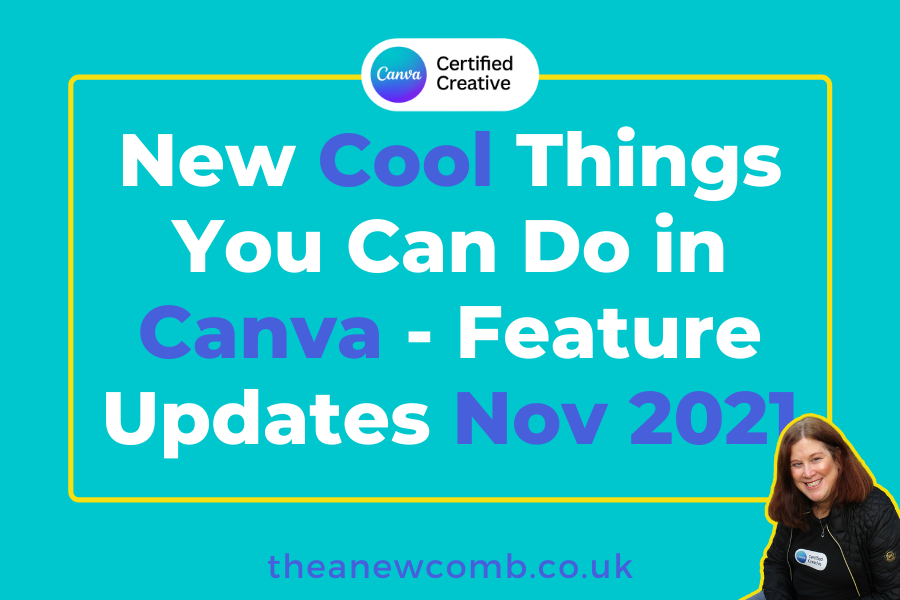 Cool New Things You Can Do in Canva

Hey everyone, it’s time to come back-atcha with an awesome update on some cool new things you can do in Canva…These are features that have rolled out over the past month or so…and thus some are in “Beta”…All are pretty cool though.

There are loads of options under “Edit Image” have you seen them? A few new kids on the block worth noting are: Face Retouch/Auto Focus/Auto Enhance.

I did a quick tutorial on Face Retouch and Auto Focus which you can watch here.

Another wee change, for me, anyway is that “Style Transfer” is now called “Paint Effects”. Have you had a play with that? There are some cool options there.

For anyone who creates trainings, coaching, webinars, tutorials or that sort of thing, the record yourself feature just got a whole lot cooler.

Not only can you record your screen – with or without a camera – but you can also move the little circle of your camera around AFTER the recording.

That may be one of the coolest things I have seen…I’ve done a quick tutorial on this one too but admittedly I’ve only used this feature a handful of times – so not quite an “expert” at it yet.

One of the most common Canva requests I have heard over the years has been people wanting a colour picker or eye dropper inside of Canva. While there has been one on the desktop apps, and Canva would often pull out colours from a photo for you, this new eye dropper is the best.

I made a quick tutorial to show you how and where to find it and use it. It’s not the best video but it does the job. I think?

Just so you know it’s available on Web – Chrome and Edge browsers.

Another notable update that rolled out last week in fact is the “Draw App” which is an absolute blast. It give you the option to use a pen, marker, glow and highlighter on any of your own designs.

What I love most about this feature is you can actually edit your drawing after you have hit “done”. By that, I mean you can move it around the canvas or make it bigger or smaller – so perhaps “edit” is not the right term.

This is big news for those Adobe Illustrator peeps out there. You can streamline your workflow now by being able to import your AI files – by dragging and dropping to the homepage. It will then be converted into an editable file.

Well those are some new things that you can do in Canva. By the way, I’m finally getting around to focusing on doing more short form Canva tutorials that all last less than five minutes (usually only around 2!) So if you’d like me to do a demonstration for you, please request it in the comments below or over on my Canva Tutorials Playlist on Youtube. I’d really appreciate the follow and feedback.