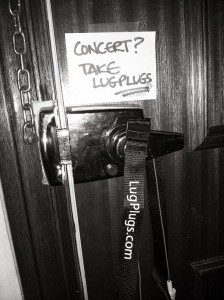 Managed to arrive back from a month in California in time to attend the funeral of Lugplugs founder Steve Broadfoot this morning. Parents shouldn’t have to bury their children. Nor should teenagers bury their fathers. Sometimes it feels like life is more than a little unfair…

But it comes to us all in the end.

Though I met him in the early 90s when I was spinning Scottish bands on the local radio station Q96, I had not seen him much since then. It was about eighteen months ago when he cropped back up on my radar. First he was on a documentary for e-spark and then he wound up taking several of my Business Gateway courses (unbeknownst to both of us at the time)…

Steve usually took a seat in the back, and was generally typing away on his laptop throughout the entire three-hour courses. (He assured me he was actioning what I was saying, but I did sometimes wonder if he was just surfing on Facebook or sending out emails)…

Steve kind of reminds me of me. Someone who I think polarizes people. Strong-willed but sensitive.  You either liked him or you didn’t. I would say I fall into that category too.

Anyway, as a result of attending my courses and getting to know me better, Steve invited me a long to be part of a co-op of associates whose sole mission was to get Lugplugs the success they so richly deserve.

I loved the idea of them the moment I heard about them (on the documentary).  I seldom forget to bring them to the concerts I attend now! They’re great for anyone who goes to gigs but also for anyone who works in loud environments – factories, airports, what have you.

While in California this month, my friend recommended a TV show called ‘Chasing Life’ on ABC. It’s about a young, 20-something, girl April who gets diagnosed with Leukemia. It’s a fantastic show about a painful, emotive subject that touches us all – eventually.

On a recent episode that I watched, one of April’s friends, has a funeral which he himself got to attend. I loved the idea of that.  He got to hear how his life actually mattered.

It made me think of what I’d like to have at my own.  Steve himself had 2 requests only – the music and the venue.

As a fellow music lover, Steve had picked the songs he wanted played on the day. (A man after my own heart)…choosing Black Sabbath to be played at his. You couldn’t help but chuckle – just a little bit.

For years I’ve often thought of tracks I’d like to play at mine (will come to those in a minute). Not so much the track itself, but the name of this band, was running through my head today. Funeral for a Friend. It’s a track I played on Q96 a few times (my second time around there)..Noisey – but I think Steve would approve. After all this is a guy whose service was topped and tailed by Black Sabbath tracks (I think – I’m not a Sabbath fan so correct me if I am wrong, if you were there).

For the record, there are few definites I’d like at my own funeral – the first would have to be Warren Zevon “Keep Me in Your Heart” – which I first heard when I saw the documentary on his final days. It’s an amazing documentary – worth watching – even if you’ve never heard of him! When the track below came on, I found myself sobbing.

Yep I’m a total sap, but it’s simply stunning. See if you agree.

A few other songs popped into my head as I drove from the Crematorium in North Glasgow back down to King Tuts.

Like this one “Dress Sexy (at my Funeral)” – a quirky Smog track.

Then you can’t go wrong with things like “The Funeral” by the Band of Horses. A band, like the National, I love a lot.

As I say I sure do love the National, and yes I realize that my musical tastes tend to learn toward the more melancholy of choices.

Speaking of the not-too-cheery music, one last one for today’s blog simply has to be Bonnie Prince Billy’s ‘Death to Everyone”. Because as I mentioned before – none of us gets out of here alive.

Though this blog post won’t be everyone’s cup of tea, I do suspect Steve Broadfoot would have liked it, none-the-less. See you again sometime, my big brother from another mother. You’re free now. The amount of people that showed up to pay their respects today means that you were one loved guy and always will be. That makes you a true success.

2 thoughts on “Funeral for a Friend”