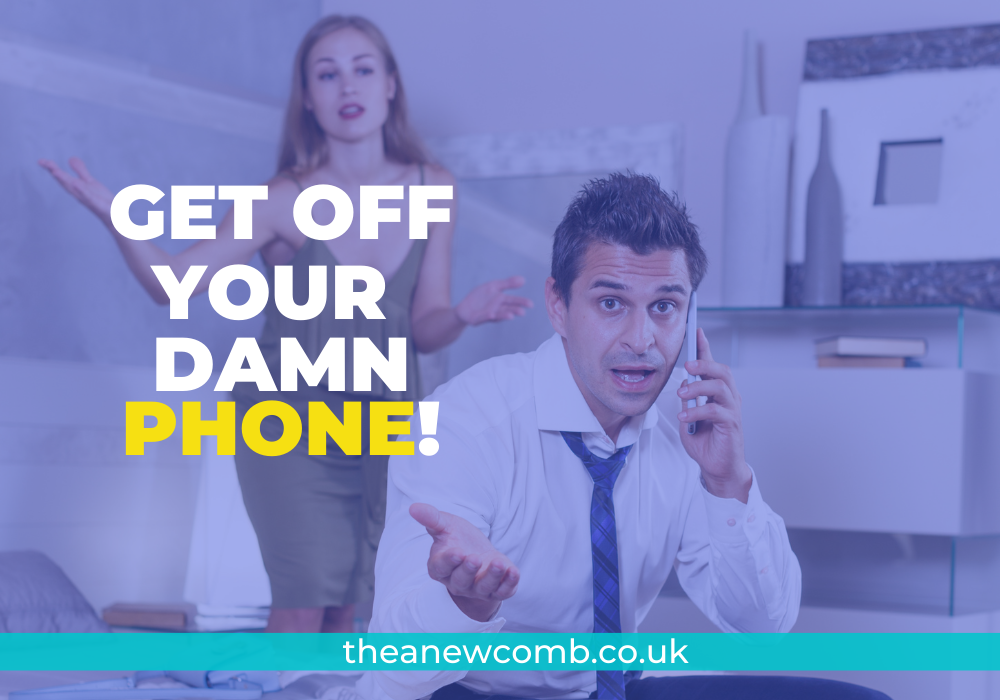 Get Off Your Damn Phone

Is your mobile a blessing or a curse? Do you ever want to scream at someone to “get off your damn phone?” Or maybe you are someone who talks on your phone during checkout at the supermarket. Do you sit in restaurants yapping away? Or how about on the train, the tube, a bus or a plane (before takeoff or when landed)? During a concert? In the back of a taxi? How about at a funeral? We’ve all seen, or heard, people do it, haven’t we? Maybe we’ve been guilty of doing things like that ourselves. I am not completely faultless when it comes to mobile phone rudeness, (I am sure my friends would be the first to tell you that…)

But I like to think I have some amount of awareness when it comes to being on the phone in public places. To me it seems like it’s becoming far too common an issue at the larger, modern, societal level.

On Friday, last week, I made my first appearance on the Call Kaye show on BBC Radio Scotland. It was an absolute delight to do the show and the topic was inspired by the woman, Jo Clarke, who made such a stick about having to hang up her call before the Sainsbury’s cashier would put through her groceries. [NOTE: If you don’t know what I am talking about, here’s a BBC report about this somewhat controversial subject.]

Now-me, I tend to see both sides to every story. It’s one of the things I actually LIKE about myself…and frankly, I thought both women were RUDE in this particular case. If I had to side with one of them though, it would be the clerk not the Chatty Cathy, I mean Jabbering Jo.

According to one report I read, the woman, Jo, was allegedly just calling her brother to say she was leaving the store. Really? Was it that important you had to do it then? Could it have not waited until after you got through the checkout?

I Am Sometimes Guilty…

In the spirit of honesty…. I was at a superstore in Greenock a few weeks ago. I chatted to my best buddy in SF the whole way around the store. When I got to the checkout line I said to him, “Hey I’m at the checkout, I’ll call you back when I am through” and that’s just what I did.

No phone call is that important. If it is, then don’t make it in a supermarket, or wait until it’s a convenient time to break the call, and then join the line.

Or, heck, stick the mobile in your pocket until you’ve handed over your cash and bagged your groceries and hopefully greeted the clerk doing the tedious, thankless job.

Then, resume your oh-so-important call.

I Asked My Followers Their Thoughts

Before and after the radio show appearance, I posted a few posts on social media about this very subject. The feedback from my peers was in line with my own opinions. One comment that really highlights the issue for me was from Garry, who will hopefully not mind me sharing this,…(as it was made on a public post, I am going to assume it’s OK):

The worst place for me was when I was at funeral. A woman in front of me in the Church proceeded to take a call in which included giving her kid instructions on how to use the microwave!! Astonishing!

Weirdly…There are currently 82m handsets in use in Britain with one in six people admitting using their phone at a funeral.

Anyway, if nothing else, this whole incident has sparked quite a debate on Mobile phone etiquette here in the UK.

We can All Be Anti-Social, Sometimes…

Sure, we can all be guilty of being anti-social when it comes to mobile phone usage…As I said before, myself included. But taking it back to the checkout at Sainsburys, if it had been me who was told to get off the phone, I’d have been annoyed, sure, but more so embarrassed.

Having customers hang up their phones at checkout isn’t Sainsbury’s policy, but maybe it should be?! To me they were a bit spineless, and sure, go ahead offer the vouchers to Jabber Jo, but maybe they could have also said “it’s an unwritten policy” and then offered her the vouchers,…Then it’s up to her if she wants to trundle off to Waitrose in the future.

These days we’re so used to being connected anytime, anywhere that we have come to believe that we’re entitled to be on mobiles – texting or talking – whenever we want wherever we want. When we are riding public transport, in a line at the bank, supermarkets, post offices, airports, on planes, in taxis – wherever….

Is it getting better or is it getting worse? I don’t know. Depends on who you talk to, I guess. I was out with a guy recently who seemed to have his phone surgically attached to his hand. If he wasn’t texting or IM-ing on it, he was talking to this person or that. I found it so distracting (and a little insulting) – so much so that it’s really made me consider my own usage when in company of friends or indeed with the general public.

Have We Lost the Art of Communicating?

Sometimes, I’m sad to say that I honestly feel that we’ve lost the art of communicating in person – I have friends, close friends, near by whom I almost never see anymore. All we do now is instant message on WhatsApp, Facebook or text. And when we do get together those phones often still take center-stage. I’m now trying to make a conscious effort to switch mine to silent or off altogether. (Shock horror).

When was the last time you sat around a table and there were no phones out at all? Well, if this has become an issue with your family or friends in the future, I’ll leave this video – by way of a a solution with you. It’s worth a try! Enjoy! 🙂

Hey there, before you go please head on over to my cool Links page. It’s got all kinds of awesome resources, tools, extended trials and freebies etc.

1 thought on “Get off Your Damn Phone!”