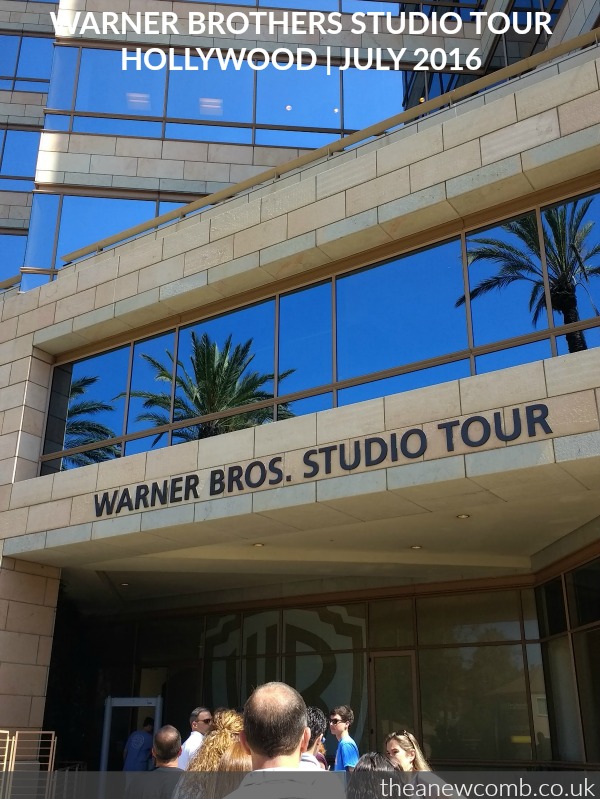 Have just returned to Glasgow – after a month in California – and thought it was time to pen a quickish blog!

Hard to believe that just a week ago I was busy cruising around the Burbank Warner Brothers studio lot in a golf cart!

Those who know me, generally know I’m a pretty big Gilmore Girls fan, so the news of their upcoming Netflix revival makes me, well, ecstatic.

I’m not sure how the idea of doing the WB tour popped into my head a few months ago, but the revival definitely played a part in it.

So I began to researching it…

To Tour or Not To Tour?

Anyway, if you’ve been contemplating taking the Warner Brothers Hollywood tour (actually in Burbank), then let me give you my own, recent experience of it…

The highs and lows, what it costs, how long it lasts, what you see, and whether it was worth doing or not…

Naturally this was just my own experience. I do suspect it’s different every time you take it.

I’d also suspect some tour guides would be better or at least different than others. My tour guide was from Chicago and a So Cal graduate in film making – so appeared to know her stuff.

How much does it cost? How long does it last?

As luck would have it, we were having lunch near the studio the day before I hoped to take the tour. My gut led me to swing by to buy my ticket. The hope was to do the 11am tour, but most slots were sold out. The first available tour was actually 11:30 AM. ‘No problem.

Plan ahead. I’d actually recommend either popping in to buy your ticket or buying it online ahead of time here.

The basic guided tour for adults is $62.00 and lasts around two hours. At the end of the guided tour, you have the opportunity to take a “self-guided”, interactive tour (“Studio 48 – Script to Screen”). You can go through that at your leisure.

In an effort to drive back to Northern California ASAP, I blew through that in 15 minutes . Instead I headed straight for the gift shop (more later on that).

You should arrive about fifteen minutes before your start time (at least). You can arrive earlier as there’s a Starbucks there for you to load up on your food and drink to take with you.

As soon as you arrive, you will be handed a ticket – whit or green (at least on that day) which is numbered.

You start with a ten minute movie about the studio’s history. It’s pretty cool. I actually found myself a little emotional at some of the snippets…

Then you load into a cart which is pretty big. They hold maybe 12 or so people comfortably.

I took the back row – deliberately – so I could turn around and try to steal shots as we drove around.

Your guide will probably start off by asking you where you’re from and what shows you’re most interested in hearing about.

Let me just say I wasn’t the only one who was excited about the Gilmore Girls revival! Other people said Friends, Big Bang Theory, ER, Shameless and no one (not even me) admitted being excited to see Pretty Little Liars places.  I secretly was because my dad and I had just started to stream season one on Netflix the week before (but shhhh).

They start the tour taking you past buildings and offices (which sometimes double as hotels in TV shows like Pretty Little Liars and the Mentalist) before making the first stop at the back lot.

This was probably the best bit of the tour for me, as the first stop is the house that serves as Mrs Kim’s Antique store from the Gilmore Girls. Sookie’s house and the actual Gilmore’s house and garage too.

One of the house’s double’s as Spencer’s house on Pretty Little Liars. As you drive around the backlot you recognize the different buildings from other shows and films too. There’s the Fuller House house, the High School (from Gilmores and Pretty Little Liars) and the Church from Two and a Half Men.

I managed to take a few selfies and pics in front of the Gilmores house which was cool…but sadly on the street by Luke’s diner, they were filming so we didn’t get to go anywhere near the diner. Also a big white truck obscured it.

That was the most interesting part of the tour for me. At the point I was much less interested in the tour.

Dig Batman? Then you’ll love the stop to look at all the cool cars and take pics near them (but not in them or on them). 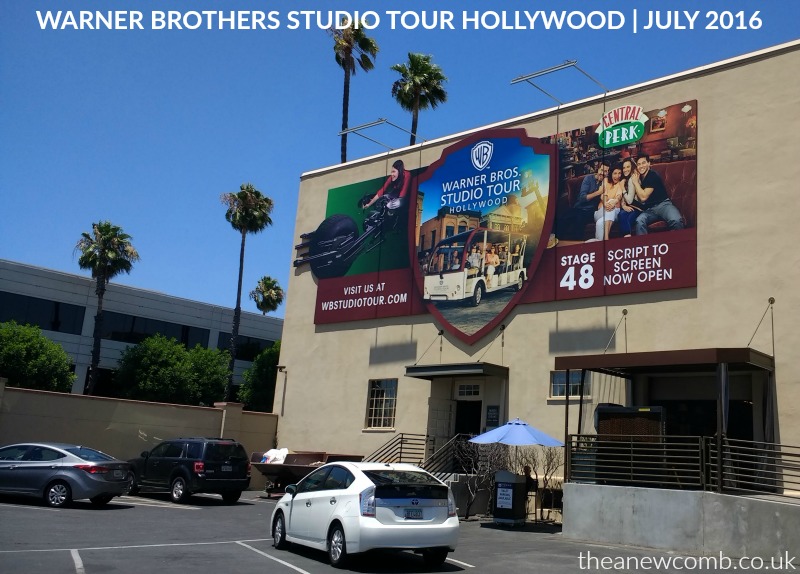 If you like Friends then there are definitely some highlights on this tour for you – Phoebe’s dad’s place, Central Perk of course, and a few other places that will look familiar to you. I had to take the proverbial “sofa picture” in the coffee shop but on such a blistering hot day, I certainly wasn’t looking my best.

There is a longish walk-through of a props building which didn’t really interest me too much — though I am sure some people would find it utterly scintillating! (To each their own),… 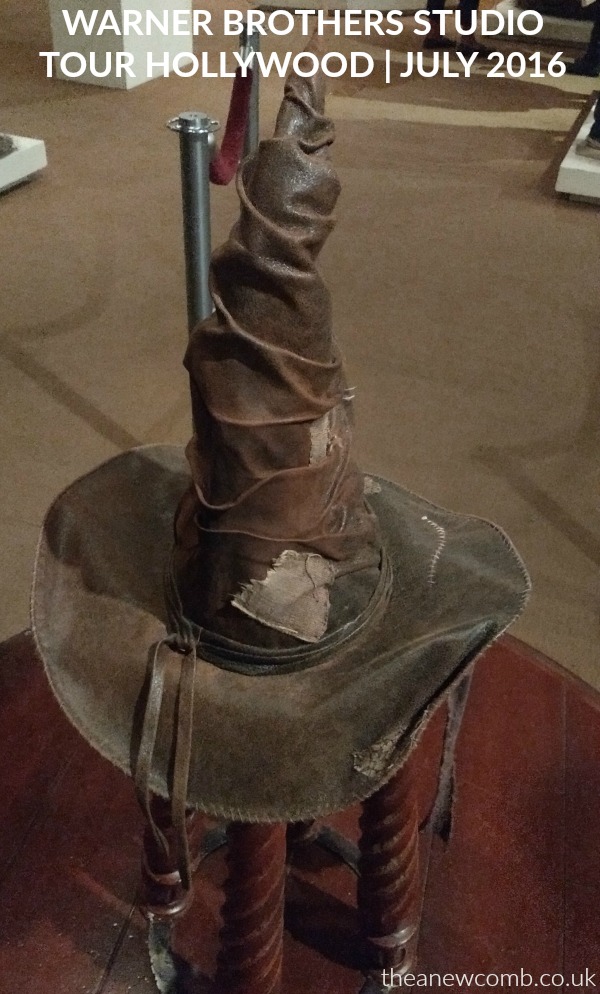 There’s also a building with Batman items downstairs and Harry Potter upstairs. The most interesting thing for me there was the sorting hat…I didn’t put it on but I did watch one of the guys on my tour get assigned to the Hogwarts house of Gryffindor…That was pretty cool.

BEST/WORST BITS FOR ME?

Best bits of the tour for me personally were mostly the Gilmore buildings. Bummed I didn’t get to see the gazebo – I had heard it was available to take pictures on but not this time.

All three James Dean films had footage shot there on the lot. There were many other classics also were shot there.

The Friends sofa and some of ER’s Chicago items were super cool.

Loved how the same houses/buildings are used in so many different shows. (eg. The Gellor’s house on Friends is Emily’s house on Pretty Little Liars).

Now when I am watching anything, I am spotting the houses from the tour!

Now for the less than favourable things. Though I enjoyed the Batman movies – the buildings, costumes and transport items didn’t hugely excite me.

That said the Batman light/signal was pretty alright!

It was only as I was checking out that I noticed the “Who is A?” tank top which made me laugh. Especially as I am nearly done with season 1 of the show and have no clue what’s going on…

Would I recommend this Warner Brothers Studio Tour? Yes I believe I would.

Whether or not I’d do it again is less certain. That said, as I mentioned at the beginning, I suspect each tour’s a little different.

I did see ONE movie star the whole time I was in Southern California and I can’t even remember his name. Naturally I didn’t even manage to snap a pic so I could later look him. I know who he is though and I will see him in something again soon I am sure.

Here’s one of the many videos on the lot at the WB. As a tour taker you’re fine to take as many pics as you like – in most places. They’re pretty social media friendly – complete with their own hashtag…#wbtourhollywood