The past few weeks have been crazy-busy networking – both in Glasgow and in Paisley (for a change). For starters, I had hoped to get up in time for the FatBuzz New Media Breakfast to hear Tim from Attacat talk SEO – but after a long week and heavy workload my bed was far too cosy to go.

So I resigned myself to checking out the hashtag on Twitter for any nuggets that were tweeted out. As I didn’t get up for that, I also didn’t manage to make it along to the West End Business Banter – which I generally love to attend.

However I did manage to make yesterday’s Banter at Martha’s in town, so that’s something! 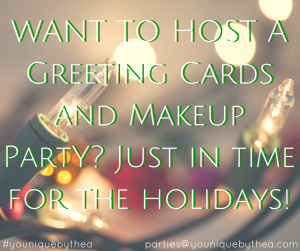 On Tuesday this week, it was my first visit to Paisley for the Renfrewshire Business Network monthly networking group. As a speaker had backed out, I was asked to step in and speak for ten minutes. Instead of just talking about what I do, (though I did mentioned my Younique by Thea business, my new greeting cards venture, my networking events and my Web and Social Media training), I asked the group if they had any questions about Social Media or Blogging and that seemed to work pretty well.

Thankfully no one asked me anything I was unable to answer fairly easily. I recommended to all of them that they take advantage of the FREE courses that are on offer from Business Gateway (click to book).  More on BG in a moment. 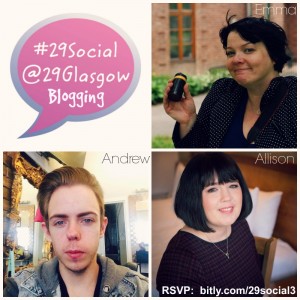 The night before last, Wed Sept 30, was my latest #29Social at 29 Private Member’s Club Glasgow. The RSVP numbers had been worryingly-low, but it was, as they say, alright on the night!

We had a wonderful panel and more than thirty people showed up for this intimate event on blogging.

I met some new folks (including my panel) and had some fantastic coversations. Was even able to showcase and mention the greeting cards (several times). Well why not? It’s my event and I don’t get paid to run them so at least I can take advantage of some self-promotion, the audience did! 🙂

Next up? Southsiders in Business

Pretty excited that Southsiders in Business has been resurrected after 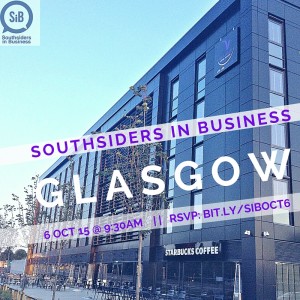 much prodding of it’s founder Liam. The last one was more than a year ago in a different venue. This one is on Tuesday October 6, 2015 from 9:30-11:30am. The RSVP numbers have been insane for weeks now. Every day another ping (or three) in my inbox to say another registration has come on Eventbrite.

The tickets are just about all gone, but if they are gone, do feel free to comment below if you’d like to attend and we’ll try to squeeze you in! Bring business cards if you’re coming as there will be a prize draw. More info on that soon.

NOTE: Though it’s called “Southsiders in Business” – I don’t suspect we’ll be checking your ID to ensure you’re a south of the river person…

Next week it’s south-bound for a change. Normally I go north to train – to the Highlands and Islands – but this time it’s toward the border – down to Dumfries to deliver a few Business Gateway courses.

One will be about e-commerce and different ways for trading online, and the other will be Facebook. Facebook’s a funny one because of my relationship to the platform. It’s a love/loathe sort of feeling. It’s handy to keep in touch with family and friends all over the globe, but as a business owner – it’s less than ideal (in my opinion).

It’s simply more challenging to reach the audience. But this is a very basic “Intro to Facebook” course so we won’t need to go into too much detail about how market on it like a rock star!

So you may want to check out some of these events if you’re interested in doing some networking in Glasgow this month.

BDX GLASGOW – Wednesday October 7 is about Blogging. A very topical subject. It’s Free, at the Butterfly and the Pig (Buff Club upstairs) and features a panel. Check out BDX for more info.

COMMUNIC8TE – Tuesday 20th October, 8am – Communic8te and 12pm – Glasgow Business Club *(I don’t know this last one but know some names involved!!)

Do you know any others? Are you hosting a Glasgow networking event soon? Let me know in the comments below!