Now let me start with a disclaimer: I know that I am on the sharpest tool in the shed. I fully admit that. I reckon, on just about most things, that I am mostly-average sort of gal.

Sometimes though, I really do get my “buttons pushed” when perusing the Internet…

Scanning through my Twitter feed just now I saw a quote, “Our greatest glory is not in never falling, but in rising every time we fall.” – which is among my all-time favorites. So much so, when I launched the soyouvebeendumped.com website it was one of the initial quotes we used. So, I know it’s actually Confucius who said that way back before his death in 479 BC.

Now this tweet had been re-tweeted nearly 500 times which would be great if it hadn’t cited Ralph Waldo Emerson as the author or it. (Ralph died in 1882 incidentally).

Heck, maybe Ralph did say it? Maybe Ralph, in fact, was Confucius reincarnated – who knows? None of us today were around in either guy’s life (as far as we know) so who can say who really said it?

But my vote’s on the Chinese philosopher with this one.

It just got me thinking how often I see these misquotes circle the globe a thousand times over. Not only misquotes, but many with incorrect spelling or bad grammar. More buttons pushed!

I think the Internet really is making us all dumb. (I include myself in there too). The unfortunate thing, in some ways, is that we’ll never know a life without it going forward. Like anything it’s a mixed blessing really. 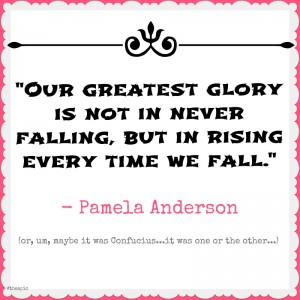 So I decided to make the picture quote and for some reason I decided to pick (on) Pamela Anderson to cite on my quote. She’s as good as anyone else would be really. I could have used Abe Lincoln. A lot of people use Abe for these quotes .

Incidentally, somewhat spookily (yes that’s a real word I asked Google just now), a quick search on Pammy reveals something rather cool posted on the Independent site just an hour ago – a collaboration with Morrissey! How fun is that?

Do mis-quotes bug you too? Or is it just me?