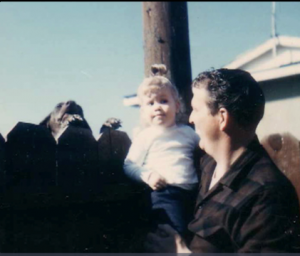 Even to this day, I’m a still a “daddy’s girl”. I can honestly say that there is no one I have ever loved, or will ever love, more than my dear, ole father. That feeling, I believe, is mutual. So I guess you might say that the first lesson he taught me is what unconditional love and support looks like…

You Can’t Keep A Good Man Down

My dad, now in his 80s, is a workaholic. Still. He’s been that way my entire life. He works out of necessity rather than joy. He has to. He’s no real savings. The big million dollar houses we lived in are a thing of the distant past. He now lives, quite simply, alone, in his Silicon Valley apartment, and works just to make ends meet.

He runs his own security business (sort of). I say “sort of” because he has a few younger guys who, (when they actually bother to show up), do most of the grafting whilst he supervises.

He’s always been a bit like a packer mule, my father. What he lacks in entrepreneurial flair, he makes up for by being a hard-working, get-your-head-down-and-just-get-on-with-it sort of guy.

Dad often brags how he had perfect attendance throughout his four years of high school. (It wouldn’t surprise me if he’s the only person to have EVER achieved that accolade). He literally never missed a day in four years which is a trait that carried into his work life too. I can’t really remember him ever staying home from work sick. Not once.

“Work” and “dad” are sort of synonymous terms for me.

Things began to change significantly a few years ago when he suffered an “episode” (he doesn’t like the word stroke, but that’s what it was).

Hands down, that was the worst phone call I have ever received. Halfway through my late night, radio show I heard the words, “Thea you father has had a stroke”. I felt the life drain right out of me on the spot.

Two days later, at his bedside, I stood over this six-foot-four-bulk-of-a-man lying prostrate in a hospital bed. Weak. Shrunken. Powerless. Sad. I felt the same. This could not be happening. Not to him. Not to my strong father.

But, defying the odds, a month later, after learning to walk again, he was done with rehab and back to work. A little slower. A little more hard to understand, sure, but working again. You really can’t keep a good man down!

Over the course of the next two years, I racked up the trans-Atlantic air miles when he broke his left hip, and followed that up by breaking the other one!

But do you know what? Rather miraculously, like the Energizer Bunny, he keeps going and going…He is the text book definition of resilience, and it’s a skill I believe I inherited from him. 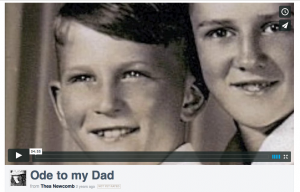 Here’s a wee video I made for him a few years ago at Christmas.

Working Hard is Good…to a Point

My dad works hard, but I’ve often wondered if that may be to his detriment. He’s the kind of guy who you reckon, the day after he retires, just won’t wake up. He’s made his life all about his work – it’s what has kept him going all these years. If you take that away, what’s left.

Watching how his work became his identity, I’ve come to realize that I don’t want to end up like him – in that respect – living alone, working all the time, sleeping or just streaming TV shows on a tablet.

My aim is to have more balance, more joy, fun and passion in my own life. Work does not define me the same way his does him. I do it and I enjoy it, yes, but I have friends, hobbies and passions – basically a life outside my work. I know who I am without it.

My dad was an Electronic Engineer by degree, and has a rather brilliant mind (particularly with Math – which is not my strong suit). He moved from the East Coast to Menlo Park – as a result of a practical joke played on him by co-workers (a story for another time).

In the sixties and seventies, he worked all over the world, and achieved much. Designing high voltage power supplies in,  he (claims he) was the only one in the world working on power supplies over 200,000 volts.

Eventually he moved out of engineering into project management.

When I was young, he got bit by the bug to leave gainful employment and run his own business.

The first business was a construction company, spending days building big beautiful homes (ones I was lucky enough to grow up in).

Then, when the housing market crashed, he segued into residential and commercial security where he has remained for the last several decades.

“Do what you love and the money will follow” is a phrase instilled in me from early on. We’re not nine-to-fivers. In fact, I’d say we both make “crap employees”. We like setting our own schedules, doing our own thing and answering to no one. I suspect, on some level, we’re both still doing what we love, and hoping that the money will follow.

That ethos has definitely shaped the choices I’ve made for my entire adult life. I’ve always stated “I’d rather earn a thousand pounds doing what I love each month, than ten thousand doing a job I loathed.” (Truth be told, I’ve come to realize, I’d actually quite like to earn the ten thousand doing what I love,…).??So instead of getting a proper job, I became a dabbler and never really had proper jobs for any length of time.

I have done radio. I co-founded ‘Bigwig’ (a music magazine) in the early 90s. After that I wrote and published an 80s music trivia book. Eventually launched soyouvebeendumped.com – rather deliberately on Independence Day in 2000. 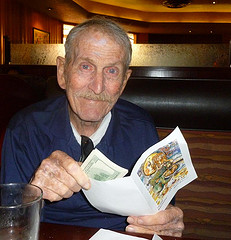 Not quite failures as such, but not one one of them has been a financial success either. That has meant that even though he’s had little money these past few decades, my father has been my CFO throughout every endeavor. Always the money guy, he’s had to support me long after any father should have to.

That fact is arguably what has caused me a the most amount of guilt in my entire life. Therefore my whole Raison d’être has become enough of a success that I can, one day, pay him back for all the support he’s given me.

It is my number one goal, and I hope reach it while he’s still here to see it.

I would attribute my passion for technology and gadgets to him as well. We were the first on our block to have the six-foot (projector) television, the top-loading VCR (some of you will be too young to even know that is), and an IBM PC.

To this day, we share the passion for the products. The TVs, the cameras, and the iPads. When I first got my dad an iPad though, he had a look as if to say “what the hell am I going to do with this contraption?” Thankfully, a month later, it was the greatest thing since sliced bread! Now it’s never out of his reach, he even sleeps with the darn thing!

Day and night, dad streams his favorite TV shows (binge watches Netflix) another characteristic I inherited from him, and we use them to Skype every morning and night.

Through the joys of technology, we even can watch TV together – even though we’re six thousand miles apart. (We’re currently watching and loving ‘24’).

The technology connects us in a way I’d never have dreamed of when I moved to the UK, more than twenty years ago, and it’s made me feel less homesick as a result.

Good on him for embracing it still, right? Though he is easily frustrated by it, use it he does. Not every eighty-plus year old is like that, are they? I sure hope that if I reach eighty, I am.

Have a Laugh Along the Way

My father is a very funny guy. Not a lot of people really realize how funny he is, I don’t think. I used to tell all my friends about how hilarious he was, and when they’d come over he’d clam up. It reminded me of those singing frog cartoons from the 70s – who would sing “Hello My Baby” until you got him in front of other people and then all you’d get is “ribbet”…

I’m not sure why it was like that, but take my word for it, he’s hilarious when he wants to be. We do have laugh right through life challenges, and I am sure it’s where I get my own quirky sense of humor from.

In essence, my father has taught me many valuable lessons across the four decades of my life. Too many to really document here but suffice it to say, he’s inspired me to work hard, and do what I love. He’s shown me what bouncing back truly looks like.

Through observing the choices that he’s made, he’s inadvertently taught me the importance of having more than just my work. I know that I need to have connections with real people – personally and professionally. I need my friends, fun, travel and joy in my life.

As wonderful and funny as my father is, joyous and passionate aren’t exactly words I’d associate with him, but maybe that will change? I keep reminding him that when he gets to the end of his days, he won’t be wishing he worked more, or streamed one more episode of ‘Charmed’ on Netflix.

More than likely, he’ll regret not doing more things he had always wanted to do. It’s my intention to get him to do some of those things now – before it’s too late.

The novel is the first item on that list, and I could not be more proud of him for embarking on this journey. It could be, if you’ll forgive the pun, a whole new chapter on his life. Incidentally, it’s called ‘Then and Again’ and it’s very good, but then I might be biased. No, in fact, I know that I am…

Happy Father’s day to my father, all of you fathers out there.

What is it that you’re teaching your kids?

1 thought on “Life Lessons My Father Taught Me – Part One”