My schedule’s been a bit mad. The weather’s been a bit mad too, so March Madness seemed like an apt enough title for today’s blog. Today’s weather – and really much of the past week – has been very much a case of “4 Seasons in One Day”.

A little while ago I was watching the snow fall and it seemed as though it was falling in slow motion. It was incredible. I should have filmed a few seconds worth to show you.

Tomorrow or the next day my new Younique merchandise should be arriving. I got a few quotes, and everyone kept saying how expensive it was for one-off baseball hats (which are my sort of trademark) but perseverance pays…I found a place in England who did them at a brilliant price!

I’ll blog about them once the stuff arrives, and I (hopefully) like them a lot! Ha. I’d ordered them for a wedding fair that I thought was taking place this coming weekend but it turns out it was yesterday. I’ve already mentioned how that went in a blog post – My Week in Younique – posted over on my Glatitude site earlier. 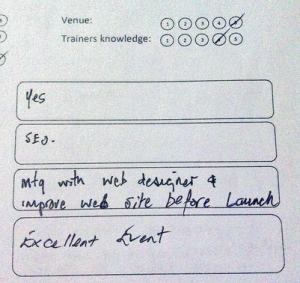 My Business Gateway training has resumed for 2015, which feels fabulous! I was a little apprehensive after being off for the better part of two months, but once the delegates started to show up, I was back in the swing of things and thoroughly enjoyed myself.

The feedback wasn’t too bad either. I think most of them got something out of it – which is always good! This guy though seemed to think the course was and “excellent event” but rated the venue higher than he did me!

Additionally I’ve been focusing my efforts on one-to-one training clients. I do like doing the one-to-one thing because it’s so much easier to taylor the content to the individual than it is to try to reach a room of people at all different levels with all different expectations. 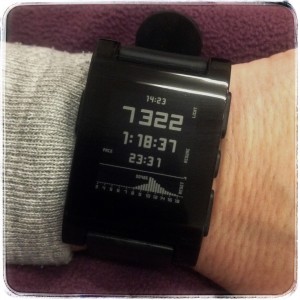 After seeing Bear’s Den and Sophie Rogers last month I also caught Royal Blood last weekend which was a good gig. Enjoyed the show. Rather hoping to get Spandau Ballet this weekend but not holding my breath on that one.

Finally my latest cool gadget, in addition to my GoPro Hero is this Inspector Gadget type of watch…the Pebble. Not only does it track my walking/running but it also tells me who’s calling me, emailing or texting me or whatever notifications I am getting across social media too! So far so good.