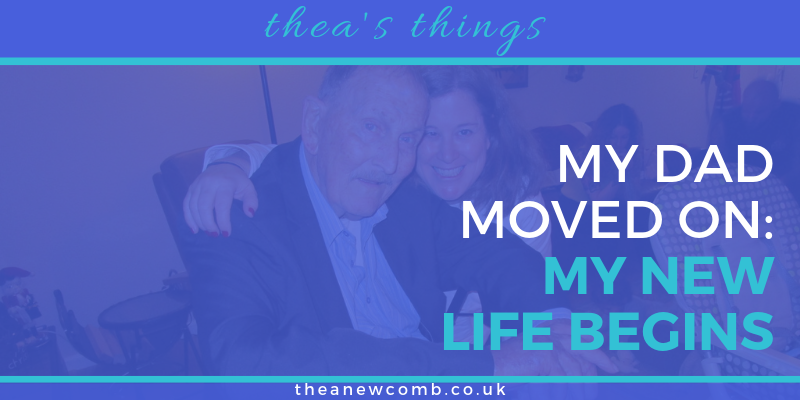 So it’s exactly three weeks to the day that my father went away. His transition was swift, somewhat unexpected (at least in that moment) and from what I could see, was fairly painless.

That said, he never complained about pain so, honestly, who knows how much pain he was experiencing?

I’m already in the process of writing a blog about his “ultimate flight” for his own blog, about his final movements and his passing, but this is a more personal post about my reaction to his departure.

I am not sure it will even be interesting to anyone, apart from me, but I guess that’s OK.

This is, after all, my personal blog and at the very least, it’ll be cathartic,…

“On Standby for the Ultimate Flight”

It was two days before Christmas that he moved on – which was kind of unfortunate timing – but in many ways, I can appreciate it went exactly the way it was supposed to.

He’d recently started joking that he was on “Standby for the ultimate flight” — to heaven, he meant, of course.

I suspect he knew the time was coming…

He’d say “I think God may be mad at me for not taking better care of my shell”…which he claimed he was just “renting”.

Yes, he was ready.

But I am not sure he was expecting to go that day.

Christmas Was Early This Year – Thankfully

Looking back, I feel truly blessed that we had one really good week together before his ultimate departure.

We had some drives, some trips to the Dollar Store and Costco, we took walks, sat in the sun together taking selfies, feeding squirrels, and hours watching TV. We even had quite lengthy discussions about the sharp exit of one of Blue Blood’s characters the weekend he made his exit.

Oh and we set up a wee Christmas tree together too…bit blurry but doesn’t he look happy?

As for Christmas, I am so grateful that we celebrated it on the Friday night, the 21st of December.

My sister Wendy and Rich hosted a lovely festive family do at their place. My nieces were there, some other family members, and a few of their friends too.

I even got to meet my great nephew, AJ, for the first time too.

So at least we had a Christmas, of sorts, before the actual Christmas Day.

The next day, Saturday, we were walking around, collecting the $20 he won from a lottery scratcher (a gift from Wendy and Rich). He was talking about how he was almost ready to take on a trip to Costco – and walk in (and not just stay in the car this time!)

On the way back from collecting his winnings at 7-11, I was cruising him around his ‘hood in his wheelchair. We took in some of the Christmas lights. Above, was about the last selfie we ever took.

It was a happy time.

His spirits seemed good to me, (or at least he was faking it good, I’m not sure…)

And Then He Was Gone

Sunday afternoon, I returned from a family outing with the girls and baby AJ and he just didn’t look right. He was shaking all over. I thought he needed to go to the hospital. Two or so hours later though, he was gone.

With the benefit of hindsight, it’s still almost unfathomable for me to think that twenty four hours later, he was, just gone. At least in the physical sense.

Honestly, in that moment he left, I never saw it coming.

There was no Hollywood ending here. No last minute “I love yous”. Our last conversation was about peeing.

Really. I kid you not.

That night, after they took his body away, unable to sleep, I kept repeating, to myself, “well, huh, that just happened”. I shook my head in disbelief. Pure shock. 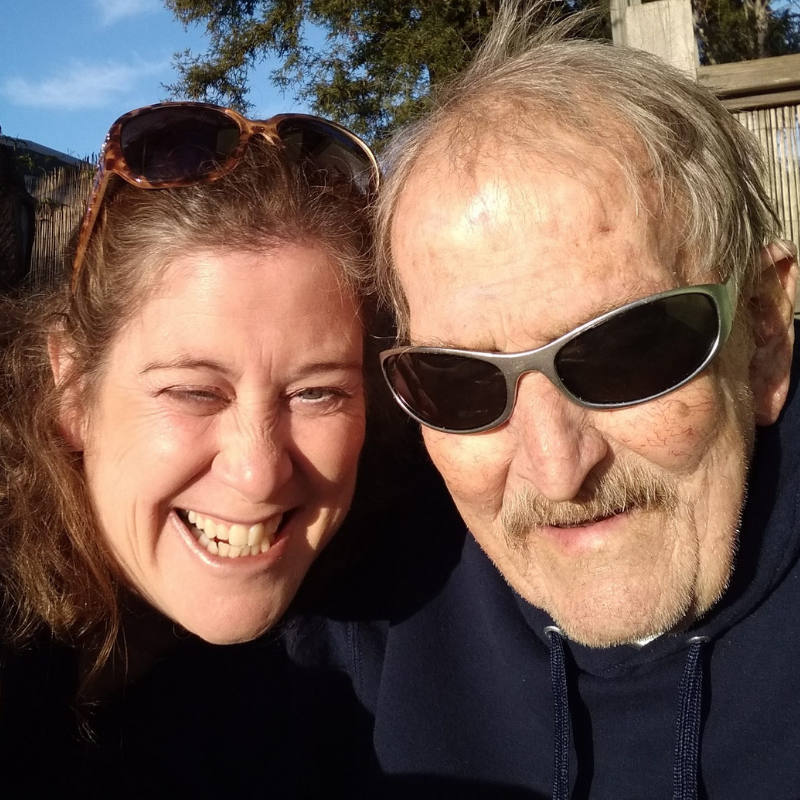 Since he moved on, I have handled it almost “better than expected”.

Not that anyone knows how they will handle the loss of their “Person”, their one, most special person in their life.

From the day I was born, until the day he left, he was my best friend, biggest supporter and my one true hero.

So it would stand to reason that I might completely “melt down” when his physical ending came about, but honestly, I didn’t.

Messages have been coming to me, from all four corners of the world, and on every platform I am on.

My usual response is “I am doing good all things considered”.

Why? I think for several reasons.

For one I was there by his side. Had I not been here, and he died alone (or even with others), I would be plagued with mental stories about it all.

But the fact I was there, with him, as he took his last breaths, was a true comfort to me.

Again, he was ready to go. He told me often.

In fact, every time I would leave to head back to Scotland, over the past few years, he’d remind me that if he should pass in my absence, it really was OK.

He’d say his “bucket is empty” (there was nothing on his bucket list).

There are many other reasons I am doing better than expected, but ultimately it’s how I’ve chosen to perceive his transition.

We have always been close. My whole life. Even the 5000 miles that have separated us for half of my life didn’t sever our connection, so I believe that bond is just as strong even though he’s not physically here.

In the first few days without him, I described my vision of him as “millions of little particles of love surrounding me.”

We All Grieve Differently

Everyone experiences “death” in their own way. People also grieve losses in different ways at different times.

I am grieving this experience different to how I did when my mother passed – twenty five years ago.

I have more life experience, and different perspective about death, to what I had then.

Am handling this OK because of the way I’ve decided to process his passing. Namely that he is still here with me – it’s just that he’s in a different form, on a different frequency, if you will.

It may just be ego talking, but I believe I knew him better than anyone, ever. I knew what he’d say in response to just about anything. So, I am still having conversations with him – just as I’ve always done. Instead of being through Skype, they’re timeless and limitless.

Instead of the physical separation that we have often had, he is here and now omnipresent. There is no separation. A hotline to dad.

There have already been a few peculiar indications that he is here with me, and whether I am being delusional or not, it doesn’t really matter does it? Coincidence or not – it gives me comfort to believe it to be so, so who cares?

So when I say that my new life begins, it’s how I go on living with the day-to-day happenings of life, and continue to feel connected to my father in spite of his transition.

I choose not to be a grieving wreck and sad about his transition. I ask myself “How can I best I go on to honor him and his legacy?” and “How can I keep this new love alive?”

Well, it is my intent to keep his Ralph Says Things going (blog, Twitter, Instagram, FB et al) – in order to celebrate him and his life.

He would want me to do so (and to have it be a success). I’ll continue to do tshirts as that was something we talked about in most of our daily conversations.

He loved coming up with ideas every day. (Sometimes he’d forget and give me an idea we’d already done! Such was life and his memory.)

Also he would want me to be happy and healthy and to go and see the world, make new friends, have adventures and be a success. I believe that he will be with me as I do…

I like to think that some day I will “see” him again….in whatever form or way that means.

Ralph was a great grandfather, grandfather, father, brother, uncle, hero and he was and always will be my best friend.

Gone (physically) yes, but not forgotten. Ever.

Ralph will live on in posts, photographs and in his Ralph Says Things shop on Red Bubble too.

I’m toying with the idea of doing a documentary. Not sure how long it could end up being but that’s what’s currently marinating in my head as my new life begins. Or maybe I will spend some time writing a book. As I sit here I am surrounded by photographs and documents of his life from birth until his passing. It was quite a life. 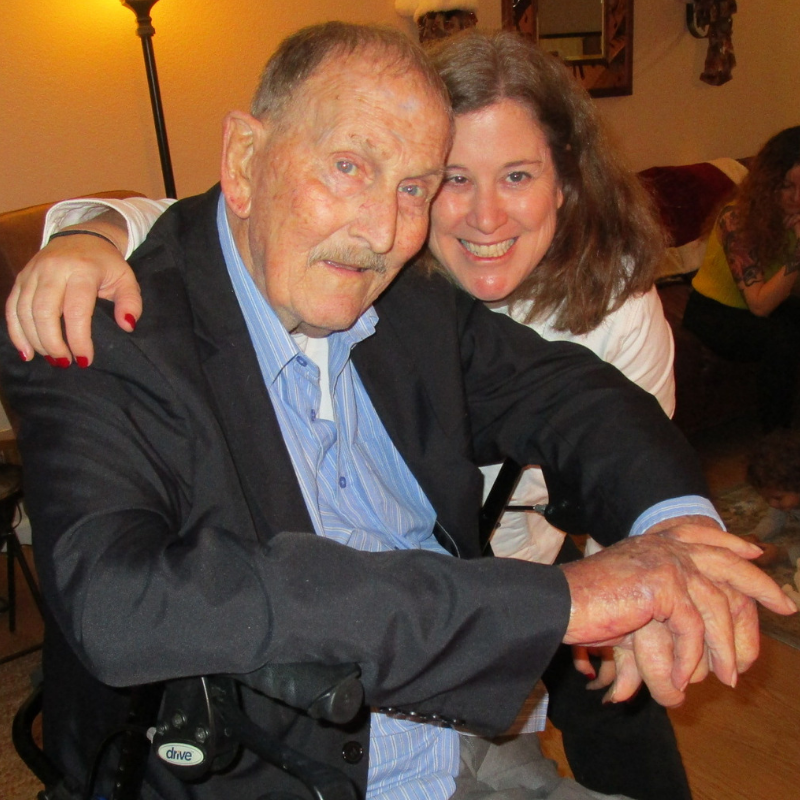 This is one of the last photographs of us ever taken. It will now remain one of my favourite pictures of us, ever….I will cherish it until my last breath.

Thanks for stopping by…and don’t worry, I am doing good, all things considered…