It’s late on a Sunday night (or technically Monday morning now) so I thought it was high time I wrote another, quick blog with some of the best things I’ve come across on social media this last week (or three…)

I’ll start with one I watched this morning (now yesterday!) – when it was shared by my Facebook friend, Scottish singer/songwriter Roddy Hart. This video actually dates back to January, but this morning was the first I’ve seen of it, and, well, it made me laugh so hard, I had tears in my eyes,…so I thought it worthy of a share today.

Was that hilarious or what? As I say, I thought so (and heck, I don’t even like Football!) I should dedicate that video to my ole boss Gary @nsdesign – he loves (American) football, and would probably get a right kick out of it (knowing Gary he’s seen it already!)

Another viral share that’s been making the rounds this weekend was both fun and educational.

40 Maps That Will Help You Make Sense of the World

August 18, 2013 · TwistedSifter · Categories: ART, BEST OF, DESIGN, FUNNY, LISTS, NATURE/SPACE, SCI/TECH, STORIES, TRAVEL Tags: · facts, maps, world tour · Leave a Comment If you’re a visual learner like myself, then you know maps, charts and infographics can really help bring data and information to life. Maps can make a point resonate with readers and this collection aims to do just that. Hopefully some of these maps will surprise you and you’ll learn something new. A few are important to know, some… >>> Open this article

There were some great maps in this collection of 40. I personally liked the one about Mississippi. (Every time I write that word, or even say it, I spell it out in sing-song way – any fellow Americans will do it the same way, I suspect).

This next one is not humorous or entertaining – but it did catch my eye and resonate with me so I thought I’d include it here too. It’s about Facebook, the social media platform that I, personally, have a sort of love/hate sort of relationship with.

Though I am not in the same demographic as was surveyed here (late teens, early twenties), I do believe I agreed with its findings. None of the other social media platforms have the same affect as FB seems to have on me…

August 16, 2013 · The Economist · Using the social network seems to make people more miserable THOSE who have resisted the urge to join Facebook will surely feel vindicated when they read the latest research. A study just published by the Public Library of Science, conducted by Ethan Kross of the University of Michigan and Philippe Verduyn of Leuven University in Belgium, has shown that the more someone uses Facebook, the less satisfied he is with life. Past investigations have found that using Facebook is associated…Open this article

Anyway, as I am in the process of setting up my new One Day, Basic WordPress website training aimed at SMEs who need a little hand-holding, I thought I’d leave you with an infographic showing its popularity.

It appears that one in three adults in the US have heard of WordPress (according to the #WCSF keynote I listened to last week) but for those of you who don’t know, it’s a Content Management System (CMS) for websites. 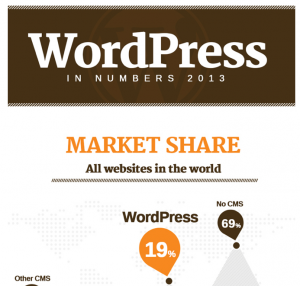 Anyway so here is a great WP infographic that I came across – detailing some of its numbers. They have a staggering 59% of the marketshare for websites that use a CMS. Seems this blog right here is just one of 500,000 that get posted daily. Geez with that number how did you find this one? 🙂

They have a staggering future (see their “anticipated growth” section of this infographic!) And some of the biggest websites in the world utilize their platform.

Well that’s all I have time for this week. I’ve got some other blogs lined up with other types of social media finds – but that will need to be in a day or so. Until next time…