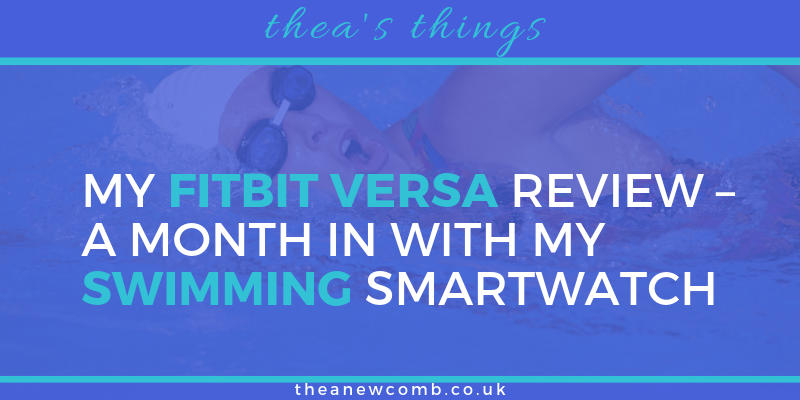 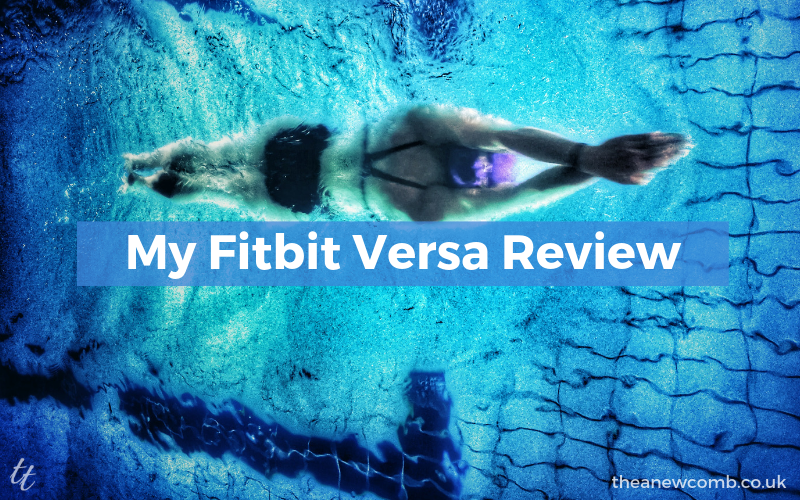 My Fitbit Versa Review – A Month in With My Swimming Smartwatch

I have been a Fitbit user for many years now. I have had quite a few Fitbits now, most recently the Flex and the Charge 2. I wanted a new health and fitness tracker and so my most recent purchase was the Fitbit Versa – which is the one that I’m going to review for you today.

After using it for a while now, I really just wanted to share my opinions and experience with it – what I like and what is not so great. If you’re looking for Fitbit Versa reviews, then this one’s for you.

What I like most about Fitbits, in general, is that they motivate me to get moving, on an hourly and daily basis.

I am one of those crazy people you hear about – who finds themselves jogging in place at 11:45 p.m.- in order to reach their 10000 steps every day.

In fact, I am “writing” this post by dictating into my phone as I pace around my living room just to get more steps…

Yes I am a weirdo…sometimes.

Other than my daily 10,000 steps, my main workout is swimming, and that is what I really wanted the Fitbit Versa for — my pool workouts.

Versa For Swimming…Yes or No?

I admit I am no Michael Phelps, but I do swim around three times each week, for just over thirty minutes, non-stop, doing the breaststroke the whole time.

I had been wanting a wearable device that would measure my laps, my time per lap and overall time for those fifty laps that I do.

That really was the main thing that I wanted it for. So you can imagine my delight to see that Fitbit had launched two new devices in 2018 that could measure time in the pool – The Ionic and the Versa.

Finally, I thought to myself! But alas, as you’ll soon see, all was not golden, as it were. I am getting ahead of myself here. Let’s go back a bit…

I Read, I Watched, I Hemmed, I Hawed, I Bought

Throughout the week before Christmas, while in California, I kept watching the price and reading the reviews and debating it.

Then my father died on the 23rd and the whole Fitbit research took a back seat until my return to the UK. (Besides, after Christmas the price had gone back up to $200, and then you have tax on top of that and I didn’t want to spent that much).

After much debate and many reviews read, I went ahead and bought the Fitbit Versa from Amazon UK January of 2019, as a belated Christmas present to myself.

So, I have now been using the Fitbit versa for more than 5 weeks and I thought I would report my results over the past month or so. 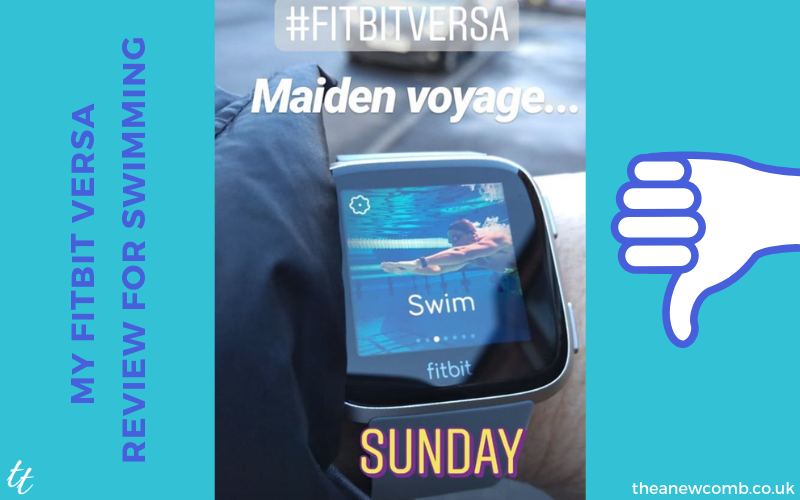 My Fitbit Versa Review: Regarding Swimming in Particular

1) The first thing I have to tell you is that the Fitbit has only accurately measured my laps two times (out of all of those workouts!)

2) I did see a lot of people claiming that it wasn’t good for the pool, and some said theirs had stopped working as soon as they swam, so I was a little bit apprehensive to start swimming with it to begin with.

Thankfully, in spite of its inaccuracy, has worked well in the pool. 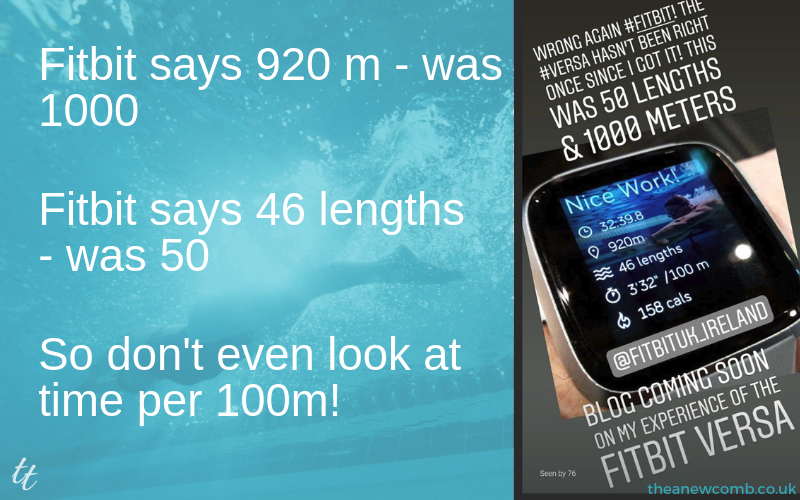 It has been helpful in timing my 50 laps – which is at least something.

One thing that bugs me about the steps is that, on the days that I swim, it counts my laps as steps which is odd to me. So on swimming days, I always end up with a super good amount of steps, which I guess is a good thing…(ha!)

4) OK, so it’s not all bad. I like the look and feel of the watch.
As the steps are so important to me I do wish that the numbers were bigger for steps because my eyesight is a bit challenged (I sometimes need my readers on to read the steps).

However, when I do swipe up, it does go to a screen that allows me to read the steps, total and for the hour, with ease.

It’s just that it’s more effort than simply tapping my Fitbit or turning my wrist and getting that quick glance.

Conclusions about my Fitbit Versa

If you’re considering getting a Fitbit Versa solely for the pool like I was, then I’d urge you not to bother with it.

Given just how off and inaccurate it is in the pool, I should have just sent it right back. My friend John thinks I am bonkers for keeping it.

To be honest, the only reason I didn’t is that I couldn’t be bothered do so, and then trying to find something else.

I will definitely look to replace it sooner than later though.

Have you got a better suggestion for me? One that works well in the pool? I’d love to hear from  you. Or if you have a Versa, let me know what you think of it and how you experience it. Thanks.