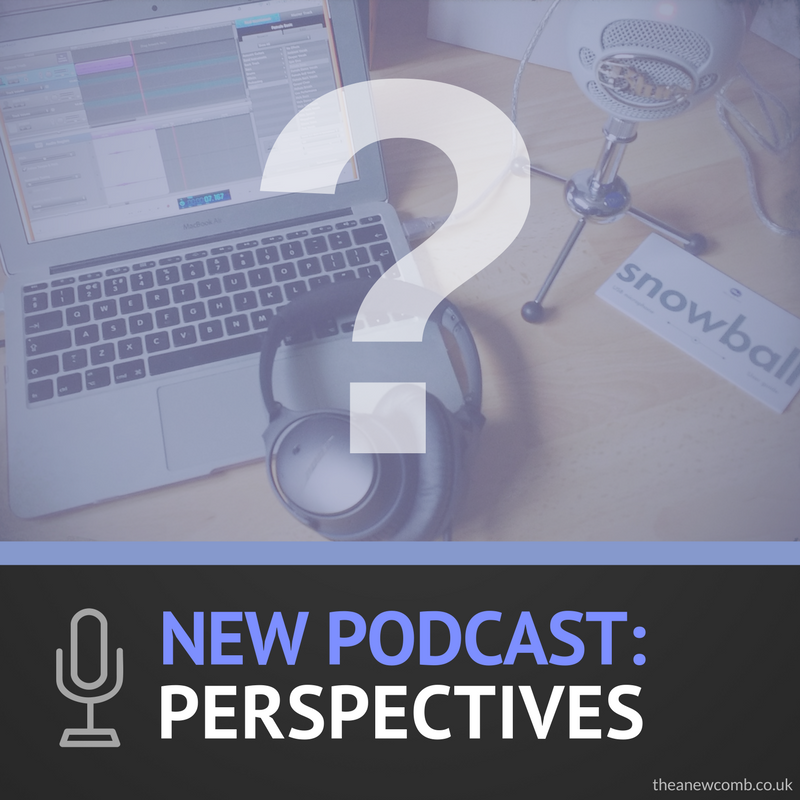 “Funny how life changes….” those were the final words in a letter my mother started to me, but never finished, before she died. That’s all she wrote, so I often wonder what she was going to say to me…What changes were happening? My “funny how life changes” moment happened this week about this latest project.

So yes my new podcast – Perspectives will be launching soon. I am not sure how often they will be, but the plan is to do regular podcasts to hear people’s perspectives…Love, life, work, creativity, music, arts, pretty much anything, well, except politics. I draw the line at that and besides there’s enough out there in the interwebs to last a lifetime.

Anyway, back to this podcast. The other day I was working with a client/friend/colleague Joanne Andrews on her new foray into First Aid Training. Joanne is the “voice of Tesco”, and can be heard pretty much daily on TV and radio – especially here in the Central Belt of Scotland…

We first met in 2000 when we both did a stint on a month-long radio (pilot) station called GO FM. We kept in touch for a while, lost touch for years, and reconnected again a few years ago, which has been fab.

I do love reconnecting with old friends…don’t you?

Anyway, we got to talking about voiceovers and my voice. I have been meaning to do a podcast and audio blogs for a year now but never quite got around to it. So twisting my arm just a little, Jo dragged me into her wee sound booth. She stood there, and without any plan, she interviewed me for five or ten minutes. After I left, Joanne edited it, voiced an intro for me and put music on it too. Then she emailed me the result which is below.

Thanks Jo! Look out for my interview with her soon!

Want to Listen or Read?

You can listen to the first Perspectives podcast here – by simply clicking the play button on the video below; Or if you’d rather, you can scroll below the video to read the transcript…

Hi I’m Thea Newcomb I am a Glasgow-based Californian. Glasgow as in Scotland, not Kentucky or one of the other states in America. But yes, I’m based in Scotland. I’ve lived in Scotland for, oh about twenty five years now. I can’t believe that. I have actually lived longer in Scotland than I did in California, so I am kind of an honorary “Weegie” as we say. (Translation: Someone from Glasgow, a Glaswegian can be known as a ‘Weegie’).
And I am now kind of developing a bit of identity crisis, because I am not really Californian anymore, and I’m not Scottish – most certainly. You can tell by the accent. So it presents and interesting sort of thought of…What is cultural identity? What is our identity based on?

What Do I Do for a Living?

For a living, I say “I wear many hats”, and I answer that question differently, of what do I do for a living – depending on who I am speaking to…
So I do a lot of networking, run some networking events, I am a social media trainer, I would say, by trade. I do web and social media training with businesses usually, but also on a personal level. I also run some websites, and I’m a blogger. I sell makeup, and I sell greeting cards as well. So I do kind of a lot of things. But I would say my biggest passion is radio, and presenting radio shows – music shows to be specific. Really the medium of Radio. Stick me in a booth, switch on the microphone, and I am good to go. And I lose myself in it, so that is the joy that  lights me up.

What Are My Goals?

I have a lot of goals, and I have been thinking a lot about that, this year. And one of them is, and has been for a long time, is to monetize my website soyouvebeendumped.com. The site is seventeen years old. It was launched on Independence Day in 2000. It gets around 50000 people a month coming to it, so I have really struggled to monetize it. So I would like to monetize that website – so that it’s covering all the bills and then some. And I am going to bring out a coffee which I am going to help use to monetize the website.
The coffee is a Scottish-based based coffee, roasted in the Highlands, and it’s called Neart. It’s a Gaelic word meaning “strength”. And so those two are kind of a combined goal of – bringing out the coffee – hopefully it will help monetize So You’ve Been Dumped.

And also I have also been in discussions with a few people about launching a Scottish radio station – probably more talk based, but I, of course, would be promoting the Music and Arts sides of Scotland. Maybe the business side of Scotland, because I know a lot of people in business here in Scotland.

Moving on from Social Media Training

So that’s a couple of the goals. One more maybe, just for good measure, is I am looking to kind of move out of the social media training, and maybe more into a charity-based role. Whether that’s setting up my own charity, heck, the radio station may be set up as a charity. I wouldn’t rule that out. But to kind of work in the third sector, or work more with helping people, in maybe in a different capacity. I just feel like it’s a year of change, and I want to do something completely different. I’m open to all possibilities.

3 Words That Describe Me?

Three words that best describe me? That’s a hard question, I’d say. It depends on the day, you’d ask. I would say ‘Passionate’, ‘Positive’,…I’m a ‘Connector’. I think the third one is that I am a connector. I love bringing people together. Though I have a website have people that have been broken apart, I love connecting people.
Sometimes I bring, you know, the kind of people that have been going through breakups – the dumpees if you will, together. And I like bringing them together so they can support each other. I like to connect people in business. I just like to be helpful, so I guess ‘Helpful’. It could be ‘Helpful’ or a ‘Connector’. I think that’s three. Is that three?

If you fancy having a chat on this, as of yet not launched Perspectives Podcast, then you can reach me via this website. The details are found on it. I am not sure the length or frequency or anything just yet but hopefully they’ll just be five to ten minutes each and released on a regular basis.