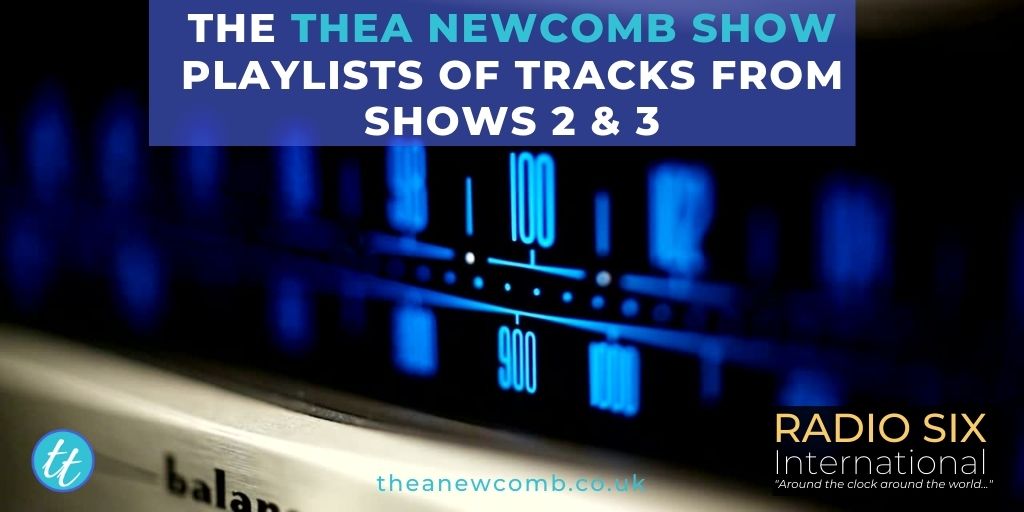 Playlists of Tracks on The Thea Newcomb Shows 2 & 3

As ever, I have gotten a bit behind in listing my radio show playlists.  So for this update I thought I’d combine them so here is the full playlist of tracks from shows 2 & 3.

I didn’t write too much about the bands/artists/videos  – but the songs are here and you can get a feel for the type of tunes I play on the radio show.

Brighton/Croydon band formed from a love of power-pop, post punk and indie-pop,…

The Beths – Dying to Believe

The Beths were formed in early 2015. In early 2019, the band undertook a tour of the UK and Europe supporting Death Cab for Cutie.The band is known for its use of vocal harmony, using the voices of all three band members. Their second studio album Jump Rope Gazers was released in July 2020

London duo Peggy Sue from their Vices album, out in Feb of 2020, the lead single was “Motorcade”. Peggy Sue is an English indie pop/indie folk band from Brighton. The band has toured with a number of well-known indie artists including Mumford & Sons, The Maccabees, First Aid Kit, Kate Nash, and Jack White.

Big Thief is an American indie rock band with folk roots based in Brooklyn, New York. The song I played was the title track to their third studio album – on 4AD.

from Berlin play fast-paced lo-fi DreamPunkGaze with fuzz, reverb and distortion – a track from summer of 2018.

After the celestial adventures of Mr Ben and the Bens’ previous issue, band-leader Ben Hall finds all the magic he needs on earth with his new album. Life Drawing – which is available on white vinyl if you like that and you collect that sort of thing.

Pintandwefall – ‘Ah- Ah-Ah’ single came out in December 2019 and the album, their 6th to date, Your Stories Baby followed a month later. “It’s a song about trying to find beauty in longing and reminiscing about everyday things. Founded in 2006 Pintandwefall is a Helsinki act which features 4 women.

Played a wee track from Great Grandpa from their Album: ‘Four of Arrows’ Released: 2019. Mono no aware—roughly translated as “the pathos of things”—is a Japanese concept that expresses impermanence and the passage of time. “It will be here even if you’re not/It will be here even if I’m not/Do you feel the same thing that I do?”

As an Austin duo, Charlie Martin and Will Taylor began their career back in 2014. In 2019 they released their third album, Heavy Lifter, and that track Cathedral was on it.

Ex:Re is the solo recordings of London-born Elena Tonra from Daughter. Her debut album Ex:Re was released physically on 1st February 2019. Dealing with the ghosts of the past. ‘Ex:Re means ‘Regarding Ex’. But I also wanted to play with the words. The ‘Re’ like the start of an email reply. The way of communicating with people when you’re very far away. This detachment, while talking about someone who you were once very attached to. It’s also ‘X-Ray’ because it’s looking into something and seeing what’s really there. With time away, understanding it a bit better.’

Angel Olsen – What It Is

Angel Olsen is an American singer-songwriter and musician from St. Louis, Missouri who lives in Asheville, North Carolina. What it is was taken from her album All Mirrors – a record that came out at the end of 2019 and met with widespread acclaim reviews from critics…

Many Voices Speak – Want it Kept

Stockholm based Matilda Mård delivers etheral and beautiful dream pop on this “Want It Kept” single from the album Strangers Candy which was released in early 2020.

Out in 2019 “Patience” was by the  Perth psychedelic pop music project Tame Impala – aka Kevin Parker. Played that for my Perth mate Fiona Kemp! Rolling Stone described the song, as Parker singing “airily over a bright, colorful groove”. Since that 2019, Parker and co were back with a Valentine’s Day 2020 album called the Slow Rush. Looking forward to hearing it.

Sea Wolf – Break it Down

Sea Wolf is band founded in 2003 led by Alex Brown Church. That track “Break It Down” comes from their 2020 release ‘Through A Dark Wood’ on Dangerbird – A label that includes bands like Silversun Pickups, Fitz and The Tantrums, Sebadoh, Minus the Bear, The Frights and a band I’ll be playing later in  he show too.

Seazoo is a noisy indie-pop group, influenced by Yo La Tengo, Courtney Barnett and Grandad. I noticed in researching the show they were due in Glasgow this week but guessing that gig didn’t happen. I’d definitely go check them out and look forward to hearing their 2nd album Joy which is just out. And if you like quirky videos check out “The Pleasure” video on Youtube.

An LA-based singer songwriter from LA, Bridgers has received critical acclaim for her music, which has been described as “exquisitely raw and revealing” and she’s worked with the likes of Boy Genius and even Conor Oberst under the moniker of Better Oblivion Community Center who I played after Kyoto!

That’s Phoebe and Conor under the Better Oblivion Community Centre moniker from their 2019 eponymous project. Writing for Rolling Stone, Will Hermes said, “The duo harmonize beautifully, Oberst’s voice often just a brooding floorboard creak behind Bridgers’ brightly bloodshot confidences.” Imagine your voice being likened to a floorboard creak (cracked me up).

Music from the Dears that’s “Instant Nightmare” . Forming in 1995, the band is led by the husband-and-wife duo of singer-guitarist Murray and keyboardist Natalia. That’s from Lovers Rock their 8th studio album released in May of 2020 under Dangerbird Records.

Soak – Everybody Loves You

Music from Northern Ireland for some music from Soak – aka Bridie Monds-Watson, better known by her stage name SOAK, is a Northern Irish singer-songwriter born in Derry in 1996. SOAK’s music has been described as ‘a vivid portrait of teenage deep-thinking’ by The Guardian.

Deal Casino is an American alternative rock trio in Sparta, New Jersey back in 2013 featuring 3 Js – Joe, Jozii and Jon – friends from elementary school days. The band’s sound has been described as “urgent, groove-heavy” and a “boisterous, bouncing rock sound not so far from Neon Trees or Young the Giant, some bands I’d completely forgotten about. That track is from their 2020 e.p. called WOOF.

Den-Mate – It’ll All Come Back

Den-Mate is the alias of Washington, D.C-based recording artist Jules Hale. Hale has released two albums and an EP on the DC record label Babe City Records. Her music has been described as “vibrant dream-pop”. Hale has cited the Yeah Yeah Yeahs and Björk as influences and NPR compared her music to Beach House.

Emmet Kai – Pop All the Stars

Emmett Kai, who according to himself is a freak pop novelty, has been knocking out songs at the speed of light since his 2019 record Baby Hits. Based in Brooklyn he is a pro-active, multi-talented songwriter/producer and label owner – who makes a superior brand of indie-pop in which he synthesises all kind of styles: his songs are a clever compound of shoegaze/dreampop, 80s sophistipop and Princean soul.

Tram Cops is the pop-jazz infused moniker  for Melbourne based Mikey Vince-Moin. Don’t know much about him. Ha.

The Flaming Lips formed in 1983 in Oklahoma City, Oklahoma. This was the last track from the most recent album.

I have one more show to go on Radio Six International. I’ve been trying to get a setup together at home so that I can do shows for not only them but other stations around the world.

For now though, that was a list of The Thea Newcomb Show Tracks from Shows 2 & 3 and I am off to choose some tunes for the final show this weekend.

Thanks for stopping by.