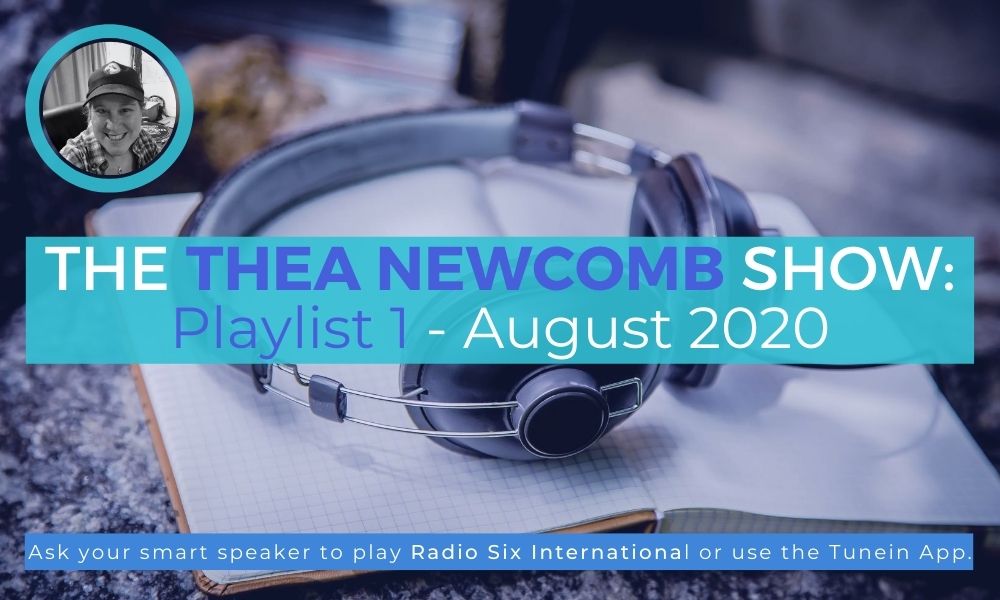 Super delighted to be back on Radio Six International for a new series of the Thea Newcomb Show (I didn’t call it that, honest)…and here is playlist one – including a wee bit of info about the acts and also some videos for each track.

When possible, I added links to the bands online. Some acts are much easier to find information on than others. Here we go.

Wasuremono – Are You OK?

Music from Bradford On Avon, England it’s a catchy summery pop tune to kick off the series. This four-piece creates ambient dream pop. WTF that is. You can find their video below and you can find Wasuremono’s Official site here.

A synth-tastic track from this Brooklyn act…

“Language entered 2020 as one of the most heralded new acts of recent memory, having already earned high-praise from the likes of NME, Fader, Pitchfork, Stereogum and countless others” – according to the blurb on the Rough Trade site.

The band gets likened to the likes of OMD, New Order, Tears For Fears etc – which is probably why I liked them so much…Old school ’80 love! Find more information about Nation of Language here.

From their album Stranger Today, “I Really Like It” came from the Brighton (UK) act Our Girl. Catch them online at We Are Our Girl on BandCamp.

Goth Babe is Griff Washburn enjoying himself. Originally from Tennessee, Griff currently lives off the grid in his 1996 Ford F-250 with his pup Sadie, surfing up and down the coast of California and these days Portland, Oregon.

Kishi Bashi is the stage name of Kaoru Ishibashi – a Seattle based American singer, multi-instrumentalist, and songwriter. He is a founding member of Jupiter One, and, for a few years, was a member of the band of Montreal. “Summer Of ’42” is about a couple falling in love in a Japanese internment camp during World War II. It was released in March 2019 as the lead single from Kishi Bashi’s fourth studio album, Omoiyari, in May 2019.

Cool and atmospheric electro-pop tunes from this duo out of Toronto.  Talvi Faustmann and Josh McIntyre shared this incredibly lush and dreamy new single in May of 2020. Here’s their bandcamp page.

“Multi-instrumentalist and bedroom producer Dominic Antonio Sepúlveda has released a new track as VEDA to stimulate your serotonin receptors or at least to give you some tips to do so. In case you did not know, serotonin, or 5-HT, is a hormone impacting levels of mood, anxiety, and happiness. End of the lesson.” (Read more about Veda here on High Clouds)

Peter Bjorn and John are a Swedish indie pop/rock band, formed in Stockholm in 1999. They are best known for the 2006 single “Young Folks”, which gained wide exposure globally thanks to commercials and TV shows. It was also named NME’s second-best track of 2006, beaten by “Over and Over” by Hot Chip.

Gut Feeling came out at the end of 2018 and it’s another catchy toe tapper…In my humble opinion anyway. See for yourself on the video:

Dreams We Had – Would You Care?

Dreams We’ve Had is a Minneapolis dream pop band – this song “Would You Care” is taken from Dear Friend. Played it for Chris my dear friend…CTO on So You’ve Been Dumped who is both a dear friend and in Minneapolis.

Dustin Tebbutt is an Australian musician from Armidale, New South Wales. He began recording music in 2013 and released his debut EP, titled The Breach, the same year. He has since released four additional EPs and one full-length album, First Light, in 2016. He’s collaborated on a more recent Bon Iver cover for “Stacks” with Gretta Ray – which seems like it would be a good fit. Swing by his website here.

Singer songwriter from Oslo, Birds is a recent single. He’s followed that up with “Murders” – which is also pretty good, but I don’t have that one, yet. Simen just ticks all the boxes for me – mellow, melodic and uber sensual.

Really need to investigate more of his music. He’s like a Norwegian Jose Gonzalez (who’s an Argentinian Swedish singer songwriter)

The beautiful “Cafeteria Believer” by Reliant Tom, is taken from the album ‘Play & Rewind’. It was written shortly after her Father, passed away in 2018 I believe. When I read her thoughts on that it made the track resonate with me even more.

That’s all the tracks I had time for on show one. So the lefter over songs rolled over on to the second show in the series. If you didn’t catch the show, you can at least hear the tunes I played – that’s possibly better anyway 🙂