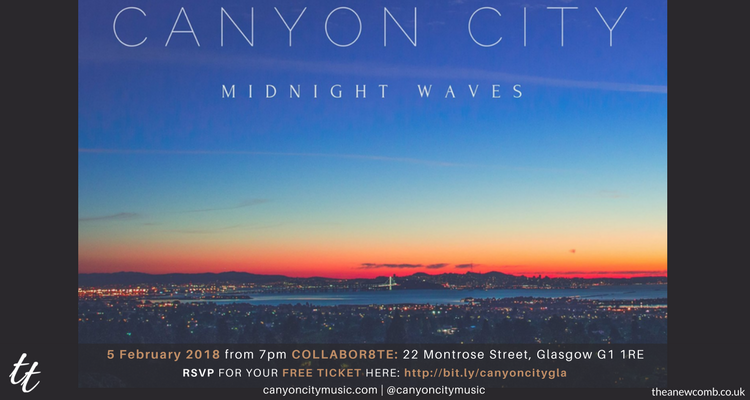 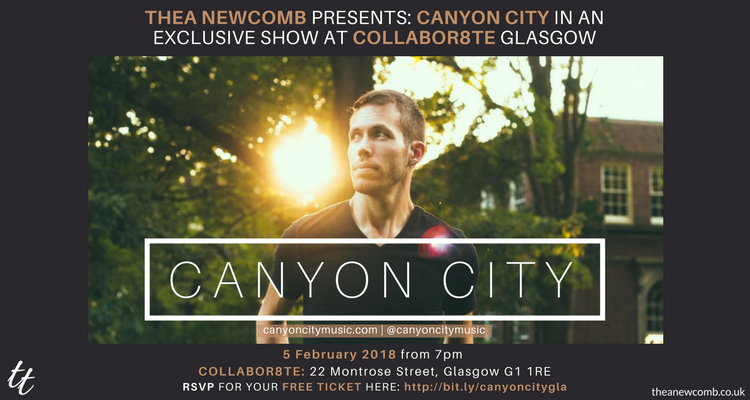 Delighted to be presenting Canyon City in Glasgow on February 5, 2018 at Collabor8te co-working space. This unique event is the first ever Canyon City  (CC) show in Scotland and, along with London (and possibly Leicester), will be among the first few CC dates in the UK ever.

It’s  an absolute honour to be bringing such an esteemed musician to do this private, free concert in my beautiful city.

Read on to learn who Canyon City is, how this unique gig came about, and how to claim your FREE ticket to see this live and exclusive show…

Who is Canyon City?

Canyon City is the moniker for Nashville-based songwriter, multi-instrumentalist and producer Paul Johnson. Don’t be fooled by the city he is coming from. Though he’s based in Nashville, it’s not what I would call “country music”. Paul actually writes and performs catchy, acoustic, indie pop tunes overlaid with dulcet lyrical tones. (I’m not sure that makes sense but it does in my head).

To date there are two full length albums Midnight Waves (2016) and Constellation (2017). His music has appeared in Gerard Butler’s film ‘A Family Man’, as well as the Hallmark TV program ‘Chesapeake Shores’ (a personal fave of mine). Among others.

I first discovered Canyon City via Noisetrade.com – a wonderful site to discover all kinds of fabulous creators (not just music but books are on there too).

I downloaded what was simply titled ‘Canyon City Full Catalog’ in April of 2016.

From the opening bars “Smoke and Ash”, I was hooked on Canyon City. Threw a CD mix together for my car that day and off I went to work in Campbelltown.

Canyon City provided a beautiful soundtrack for the 140 miles. Whenever I hear those earlier CC tracks now, it reminds me of that idyllic drive. Always.

Since discovering CC nearly two years ago, I’ve been playing tracks on my various radio shows, getting to “know him” via social media and keeping up to date via the Canyon City Mailing list.

That’s how I learned of the upcoming London show in February. Not wasting a moment, I immediately reached out and invited him to Glasgow. I said I’d book him a hotel room and find the venue. Basically “get yourself here and I’ll do the rest”. Somewhat surprisingly, he agreed.

My first thought was to host it at Celtic Music Radio (where I do the odd show), but then I decided the room where they have their living room shows was too small…

The next thought was Collabor8te. I wanted something different, and because it’s a great space, it’s central and, hey, it’s my second home in Glasgow…it was sorted. Teresa, Collabor8te’s owner, was delighted to host Canyon City as she’s always looking for innovative ways to both use her space and promote it to wider audiences.

Here’s a recent video to see Paul in action…

The Canyon City show in Glasgow is a FREE, private, intimate show. We’re the capping the guest list quite low. Though he doesn’t know it yet, I’ll likely interview him just as I would if he were appearing on my radio show. He’ll be playing an unplugged set – most likely without a mic or any amps (numbers permitting).

So if you’d like to come along to the Glasgow show you need to register on the Canyon City Glasgow Eventbrite link.

If you are within traveling distance of Glasgow then this is a show you won’t want to miss.

I guarantee you that the next time you see Canyon City in Glasgow, it will be to much larger crowds. Tuts. Barrowlands. Hydro. Larger. Mark my words friends, this show will be unmissable.

In Case You Missed It…

I have been remiss with my blogging but will endeavour to do better going forward in 2018. Until next time, I’m Thea saying “see ya”! 🙂

This brand new video was just shared on social media – premiering on The Blue Grass Station website – but as their video looks all wonky on the page, I thought I’d share the video here…straight from YT. It’s already added to Thea’s Canyon City Playlist on my YT channel.