Let’s Talk about Blogging For a Moment 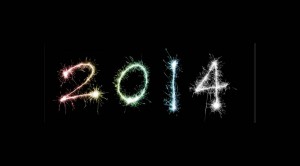 The challenge I have, (well, apart from the obvious lack of time to be consistent which is paramount in all social media – especially blogging…) is that I try to run three blogs. Silly woman!

The longest-running blog I’ve managed, which is easily the most popular of the three, is soyouvebeendumped.com. Nearly twenty thousand people each month view that blog! That figure would, no doubt, be higher if I blogged more often…but blogging for the romantically-spurned is even more of a challenge when one is not newly-dumped (incidentally, it’s been years and years since I was, thankyewverymuch!)

Plus, the topic of breakups is so heavy that it makes it more of a slog to churn out interesting, helpful, relevant content…which is what all blogs should be! So yes, must_try_harder on that.

The other blog I run is for my latest company, Glatitude, which was set up in order to deliver, bespoke, one-to-one training in social media and basic WordPress skills.

My Glatitude blog, above all the other blogs, should be kept up to date to prove I practice what I preach but alas it ends up being more a case of cobbler’s shoes…

And then there’s this blog, which was about the training side of things, pre-Glatitude, but now is more just reported ramblings from where ever I am and whatever I am doing so without further adieu – let’s do this!

At the moment my movements are basically cruising around the Silicon Valley topless in this wee motor. 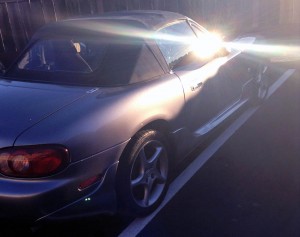 Though it’s not particularly hot this trip, at least there’s not been any rain – which seems to be the complete opposite of Glasgow. And it’s certainly been warm by Glasgow standards so when I’m out and about it’s usually topless (the car not me).

When I arrived in the Valley of Silicon, I picked up the car, dropped my bags off at my father’s and headed straight out to PayPal’s HQ to hear a talk by Scott Berkun. Scott has written a book called The Year Without Pants: WordPress.com and the Future of Work. (Great title, or what?)

Funnily enough, though I haven’t read it (still), it was a book my colleague Gary Ennis from NSDesign had just mentioned reading only two days before.

Though I’ve known of the book for a few months now, (since signing up to attend the event) the coincidence of him recommending it just before I happen to be attending told me that I need to read this book. Soon.

Blurry-eyed I wandered up to Scott before the talk and relayed the story which merited a hug from the author. Truth be told, I’d wanted the book, but like Olaf in Frozen, I do rather like “warm hugs” too – so that was a result if ever there was one. I mean anyone get a book but not everyone that night got a hug! 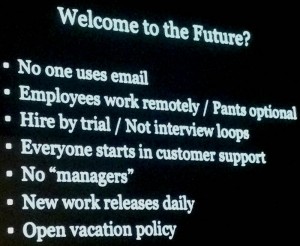 Anyway, though unquestionably jetlagged, I thoroughly enjoyed Scott’s talk about his experience of working for WP.

WordPress, as a company to work for, sounds very interesting to me. The culture is unusual to say the least. The idea that there are no offices to base yourself in, you work remotely so that makes “pants optional”.

You don’t have to go through the tedious nerve-wracking process of resumes (CVs) and interviews to get a job to work at WordPress. No one uses Email there and everyone starts in Customer Support. How novel!

Yet even with this unusual way of doing business, WP still manages to be company that plays a massive part in the Internet as a whole (look at WP live stats here). In fact, WordPress.com, is the 8th most trafficked website in the U.S!

The whole notion of its unusual company culture was truly thought-provoking.

There are many Scottish business owners (and elsewhere) who should take a page or two out of this book and apply it in their companies. While I am sure it wouldn’t work in every sector, some amount of innovation can work wherever I suspect. Plus “Happy workers” tend to be good workers and loyal workers too. Well, in my experience anyway…Incidentally, the best work experience I’ve ever had, working within a company, was in the aforementioned NSDesign office.

Well, anyway, I am glad I finally got around to writing a few notes about Scott’s talk. I’ve been meaning to for a few weeks now, but with the holidays there, I never quite managed.

My next update will most likely be next week – after the Consumer Electronics Show 2014 in Las Vegas. Yes, I am leaving the Valley for Sin City to check out all of the cool tech/gadgets and to hopefully hear some fabulous Keynotes. One I am most looking forward to is Marissa Mayer the CEO of Yahoo but there are many others that look pretty good too.

Another thing I am excited about are all the Wearable Devices that are going to be launched at the conference. Already somewhat of a fan of FITBIT (depending on the day), I look forward to seeing what else is in store…

I’ve wanted to go to this conference for many years (it’s on my “bucket list”) so was pleased when I was at a party with friends from Cisco and Eton Corporation who suggested I finally go. Speaking of Eton, I love the idea of this Rukus Wireless Sound System  (what a great name, Rukus!) – but not 100% sure the Glasgow weather would facilitate a quality sound. What do you think? (PS: I am assured by a top chap at Eton Co that it will definitely work in dreary ole Glasgow, I’m just kidding). I hope to try it, and if I do, I’ll let you know!

Until next time…from the Valley of Silicon, I’m Thea, saying “See Ya!”