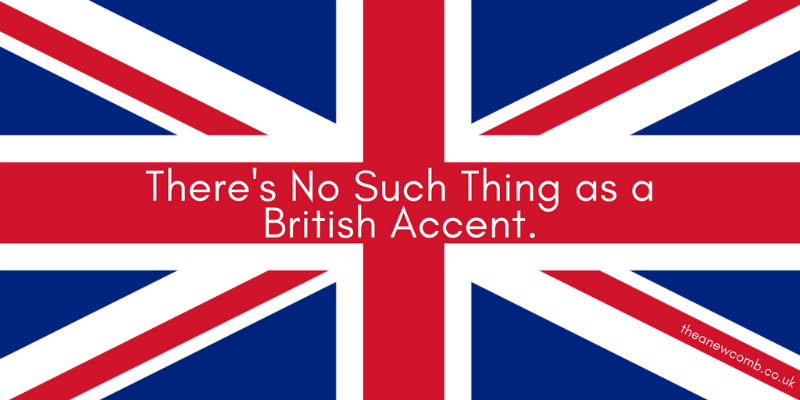 For those who don’t know me, I am Thea. I moved from California to Scotland in the early ’90s. I’ve now lived in Scotland longer than I did in America. Honestly, that’s a weird concept to me. You see I no longer feel “American” as such, but then I am definitely not “Scottish” either. Perhaps the truth lies somewhere in between. I thought I’d start to do the odd blog post about my life straddling two worlds. The first is about a pet peeve of mine, if you’ll allow me to indulge myself just a bit.

Britain is not England

For a long time something that has perturbed me, just a little, is hearing people say he (or she) “has a British Accent”.

Well folks, I am here to inform you that there is no such thing as a British Accent.

To be honest, I am not sure if it’s a phrase that gets used beyond America, or if it’s just a stateside thing? Today, I thought, instead of getting annoyed, I’d try to educate my North American (or other) comrades.

You’d be amazed at the questions and comments I get, when back in California, from family and friends about Scotland.

To be fair, some people are informed, but many whom I come across when stateside, don’t even know where Scotland is!

Some even ask me how England is or if they speak English here.

Many do not know the geography or proximity of England to Scotland (and don’t even get me started about Wales or Northern Ireland).

I have to practice my empathy and remind myself that I didn’t know anything about the United Kingdom, aka Great Britain either. It wasn’t until I came to study in London in 1987 either. And one could argue “why should they know” about the UK?

OK, Back to the British Accent Remark

So coming back to the whole British accent thing…Those in the know will understand that each country’s inhabitants sound vastly different. And I do mean vastly.

What’s funny when people refer to a “British Accent” they not only usually mean an English accent, but also they tend to mean London or the southern region of the country accent.

Even withing England, you have very different accents with regional variations…so even saying someone has an English accent is arguably too broad of a term.

A northern “Geordie” accent (have a gander at this ‘How to Talk Geordie’ video – it’s pretty funny. Note: I couldn’t actually get any of the words they were talking about!) is different to a Mancunian or Liverpudlian accent! For some entertainment check out this kid and his accents (not just “British accents” but ones from around the world).

Scotland, my home, is no different. Take someone from the Borders, Central Belt, Fife or the Highlands and Islands – and all would have very different dialects.

Not only that – even breaking it down locally to my city, Glasgow, and you’ll find very very different accents. Someone from Govan, a southside, generally poorer area, in Glasgow sounds radically different from someone from a northern more affluent area in Glasgow such as Bearsden. There can be variations from north, south, east and west here.

Generally I pride myself on being pretty good with accents – on the whole. I definitely notice the differences as I travel around the country for work. I am intrigued by them too. Some accents, particularly in Glasgow can be beautiful and some can be well, how to put it tactfully, not.

It’s Not Just Americans Though…

Not to go too far “off topic” here but frankly stereotypes and cluelessness can go both ways – whether that’s about accents or general misconceptions about other countries.

On a daily basis, I am on the receiving end of so many erroneous remarks and assumptions about America and Americans.

In particular I find there are many about my birth place – California.

People in the UK often assume we all walk around going “have a nice day”, filled with positivity, and confidence. They also assume the sun shines every single day, and that we don’t get rain, or snow, or any bad weather.

During this recent winter in California, that could not be further from the truth…

On a personal level, just about every single day in Scotland, I hear the words, “You’ve not lost your accent”. I would think that would stand to reason as I moved over to Scotland in my twenties. My accent would have been fully formed by then.

In all that time, I still can’t do a Scottish accent.

Incidentally, somewhat ironically, I hear “you have a bit of an accent” when I go to California.

So who’s right? Both I suspect. I refer to the earlier remark about not being Californian and not being Scottish either. I don’t know what I am to be honest, a mixture of both, I suspect.

But please help me spread the word to educate people – there is no such thing as a British Accent. Public Service announcement now over.

Thanks for swinging by the post. If you want to learn the difference between Irish Gaelic (gay-lick) vs Scottish Gaelic (gal-ick) check out this awesome video!

Before you go, please check out my ever-expanding group of creativity, productivity and business links.