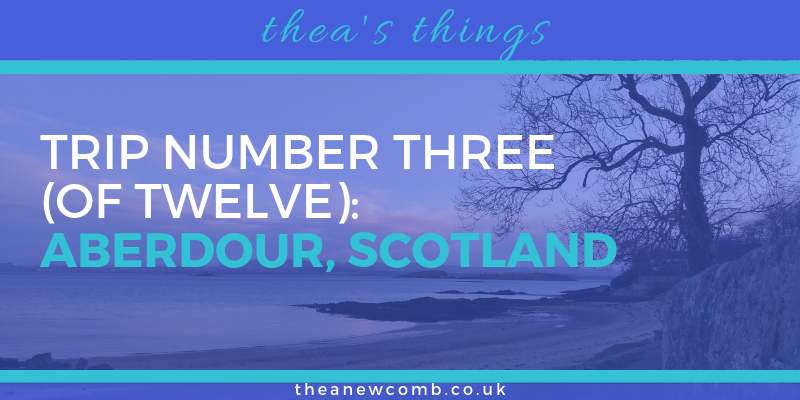 By the first week in March, I’d already done my third trip of the year to Aberdour, Fife. I went up for one night and liked it so much I stayed a second night. Aberdour, Fife wound up on my map due to meeting the owner of a hotel John at one of my Canva workshops in Lanarkshire. He’d traveled all the way down for it as it was the closest one to his business.

Anyway John wanted to talk about an idea he had to do some workshops at his hotel so it seemed like a way of doing both in one fell swoop…Namely a trip away and a face to face chat about his concept for these masterclasses. 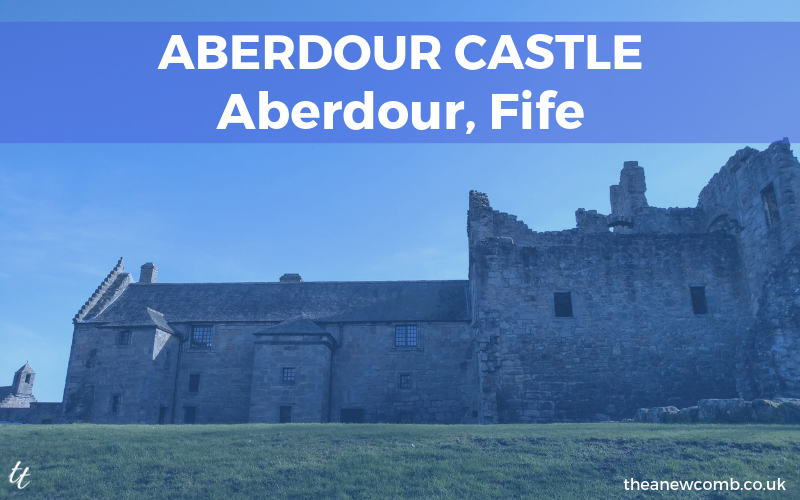 So along I went – this time last weekend to the Woodside Hotel in Aberdour. I’d known nothing about the quaint wee village north of Edinburgh – apart from the fact it had a couple of beaches (Silver Sands and Black Sands) and a castle that was featured in Outlander as well.

It’s such a quaint wee place with a good feel to it. I met Woodside owner John at their cafe McTaggarts to start off the weekend and then was taken on a walking tour of the area. We strolled down to the harbour, up over some bluffs from one of its main beaches to the other.

Across the street from the hotel is a street with big stone gates which leads to the Aberdour Golf Course.

After returning to the hotel, our discussions about John’s workshops at the Woodside began in earnest. I’ve tentatively called them Workshops @ the Woodside but they can be called anything. It’s an exciting concept of doing half and full day workshops in areas like: health and well being, personal and professional development and finally the their area is loosely called creative pursuits. Pretty much everything we discussed would fit under that heading. 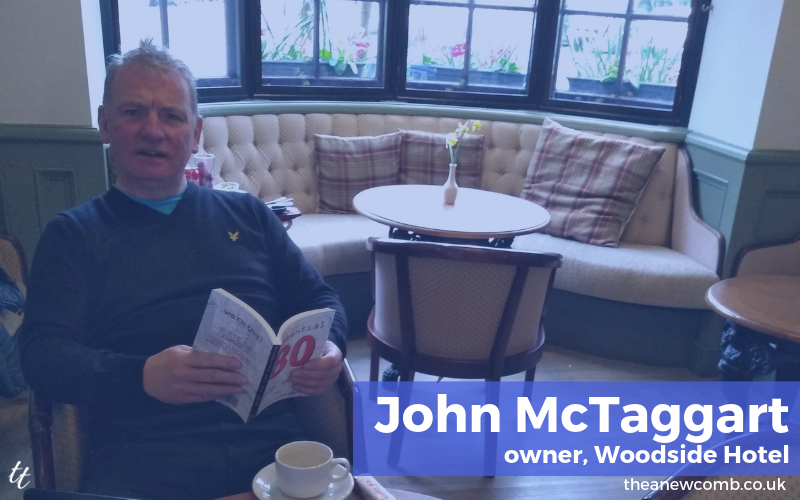 John and I also talked a lot about music. He was one of the 2000 or so people that actually bought my Essential 80s Pop Quiz book that I self-published in 1998. As he couldn’t find his, I brought him a new copy and five others to do with whatever he chooses. (‘Beats throwing them in a skip eh?)

After the walk and all the talk I was pretty beat and retired to my room, or should I say suite, for a few hours. The Rennie Suite is a lovely large room with bay windows, an ensuite bathroom that boasts a bath and a shower, and a separate small TV room off the main room.

Took the opportunity to write in my Scotland Travel Journal (available on Amazon websites around the world) and a bit of a power nap before dinner. 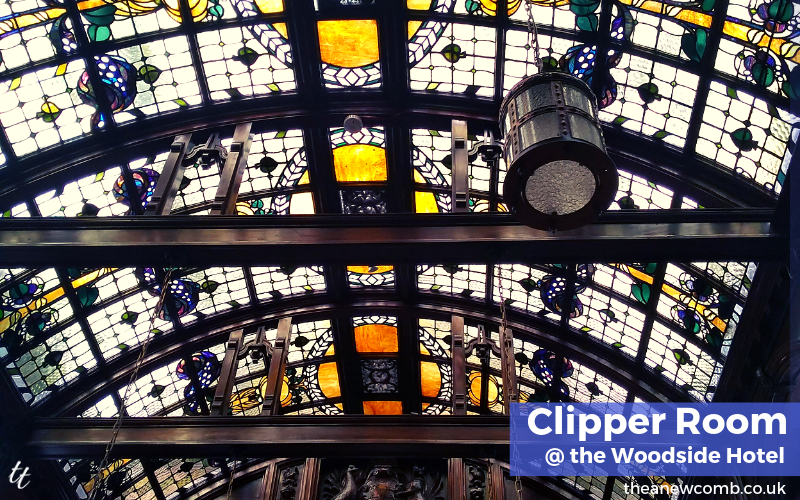 At 7pm went down to have dinner with John and his wife Lis (pronounced Liz) in their spectacular Clipper room – complete with a cozy fireplace and a roof that was formally on a steamliner, the RMS Orontes. Dinner was tasty and conversations a plenty. Around 9pm or so it was back up to the suite to finish streaming my latest TV binge – Northern Rescue – on Netflix. (Very good, I recommend it)

Went down for breakfast, and had a chat with John about music. He proceeded to whip out a large variety of cassette tapes. One was even of my good friend’s bank, Thrum. Told him to open up and read the liner notes…to see my name amongst the others. Before I knew it, it was time to consider making tracks back to Glasgow.

I loaded up my luggage in the car and came back in to return the keys, only to realise I didn’t really want to leave…

When John asked if I had to, I paused to consider it for a moment, and the answer was “no”. I could stay another day in Aberdour Fife and explore a bit more and that’s what I did. 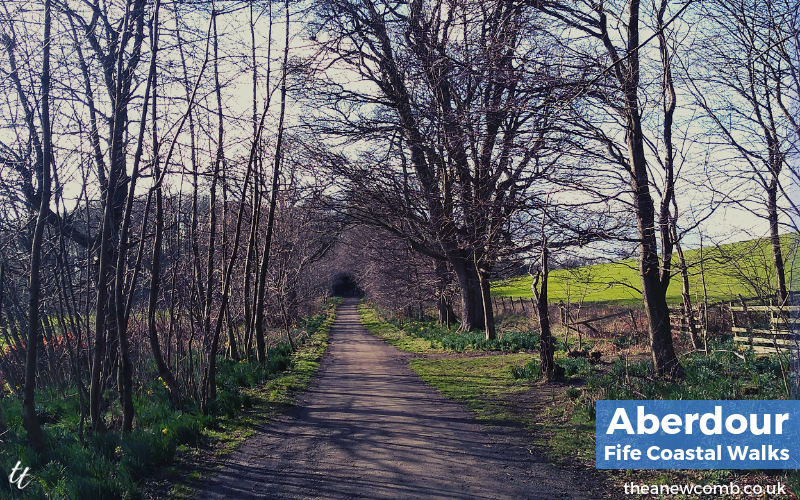 I took myself on a long walk by the golf course until I could really go no further (without winding up in the middle of someone’s rounds) and headed back to the village. By now I’d worked up an appetite and headed back to McTaggarts for lunch. After lunch it was a scoot around the grounds of Aberdour Castle…Well as far as the gift shop where I bought a few cards. I was too cheap to pay the six pounds to enter, but I will go next time as the views of the castle from inside the gardens look spectacular.

Enjoyed My Time in Fife

After that it was more of the same, food, bath, writing, thinking, sleep. Next morning it was a dash back to Glasgow for a meeting. I was surprised it was only an hour away (55 miles door to door).

I look forward to going back to the Woodside Hotel, Aberdour, Fife for the workshops or possibly some gigs, of which there are many cool ones.

Was great to see owners John and Lis, of the Woodside in the newspaper.

In case you missed it, here’s my Trip one – Balmaha and Trip Two to Largs.

No idea where I will go for Trip Four but watch this space. It might even be Berlin next month. Or maybe the Highlands. Who knows? Open to suggestions…If you have them, leave them in the comments below.

PS: In case you missed why I am doing all of these trips each month, it’s because I decided to as a way of celebrating my father by taking him with me on little trips. I believe it’s what he wants for me now…