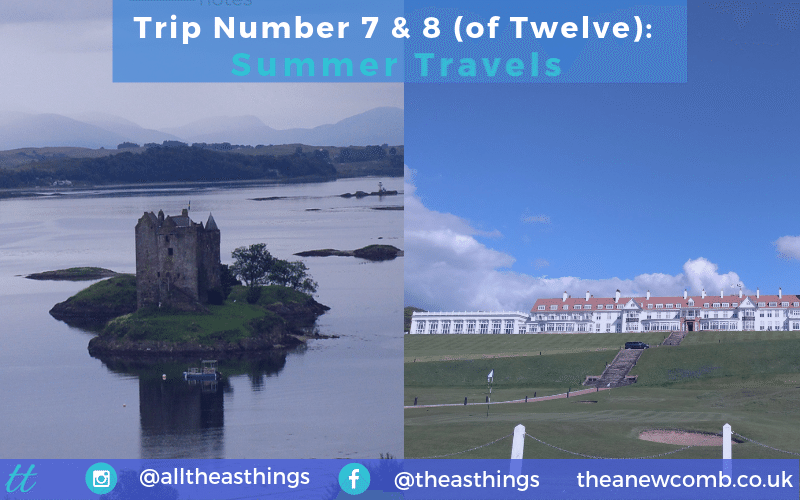 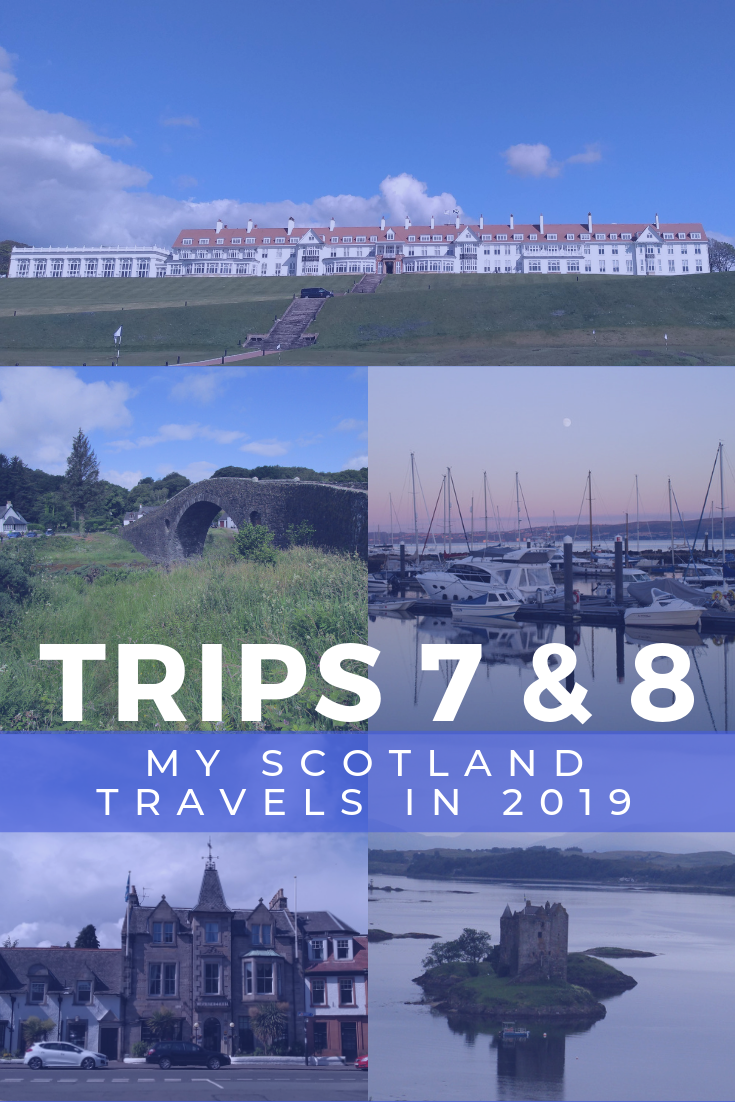 For a somewhat quietish summertime, I seem to have gotten behind due to my summer travels…So I’ll fill you in on my recent trips, in Scotland, now.

The good news is that I have been traveling every month – just as I set out to do back at the beginning of the year. Really these posts are probably more for me than anyone else – to reflect back on this year of travel. I’ll aim to add some pretty pictures so it’s not a complete waste of your perusal…(Note: there are Amazon affiliate links to some of my journals and products).

Be warned – this was typed very fast and not proofed – so expect some mistakes along the way.

It was my birthday in July – so I went to Helensburgh on the West Coast of Scotland for a night away in nearby Rhu.

Enjoyed a lovely lunch al fresco followed by a wee scenic route back to the hotel (thanks John C).

After John dropped me back to my hotel, then Joy came along to provide a bit of pampering – new eyebrows and lashes tinted and a massage too.  Once she headed out to a gig in Paisley, I enjoyed a spot of dinner and walk to the nearby marina where I took this shot that ended up on one of my journals. 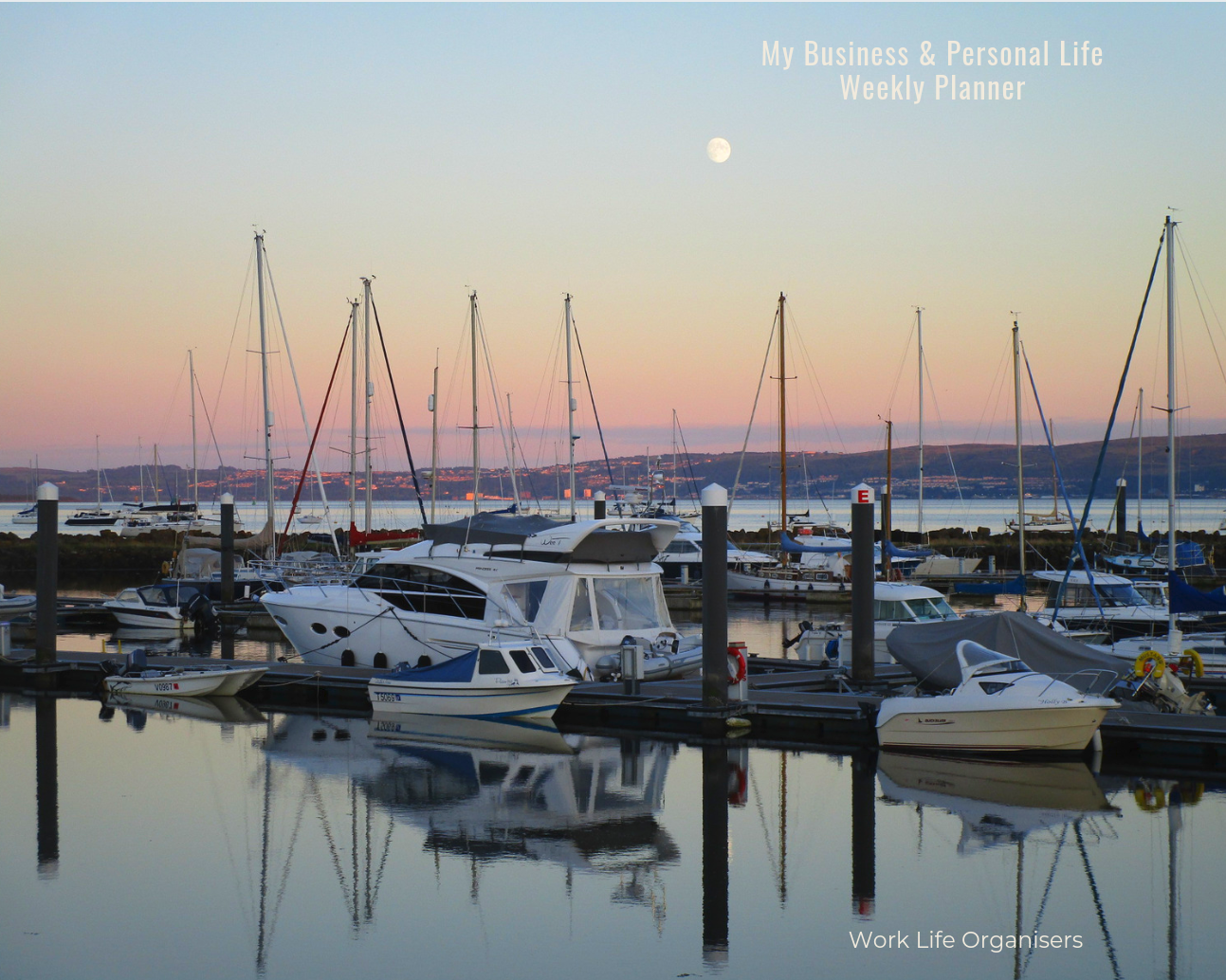 The next day I was back to work with my dear client Angela who is a queen of Scottish tartan and tweed jackets (especially for women). She owns Royal and Plaid and she’s fab.

Since it was my birthday, I treated myself to a few jackets which I look forward to wearing once the weather provides a bit more chill to the air. 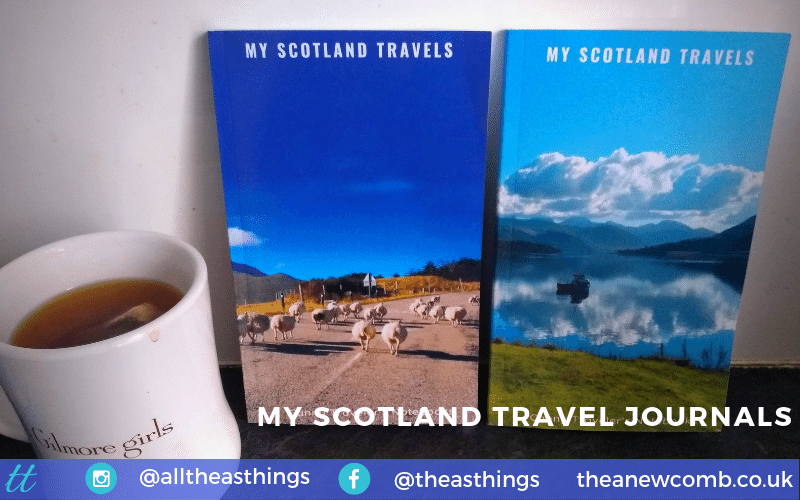 The next day an ole elementary school friend, Kim, flew into Edinburgh with her daughter and I got to play tour guide. I  took a buss from Buchanan Street and met them off the airplane. I showed up with a Welcome sign (made in Canva, of course) and two new travel journals for them to write their notes in.

From EDI I escorted them into Edinburgh. They were staying at a posh, five star hotel near Waverley, whilst I stayed at the other end of Prince’s Street in more modest accommodation. 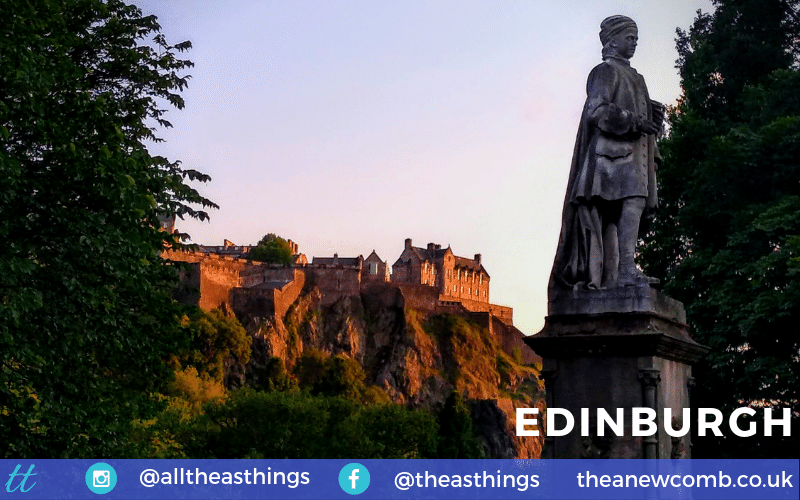 It was fun showing them around Edinburgh, and talking about some of my fave spots in the capital. Weather was mostly fine and dry.  Naturally they loved the city.

At the end of the day, I hopped another bus back to Glasgow. (It should be noted that I never do buses or at least rarely. Usually only to Paisley to deliver workshops…It ended up taking me two hours to get from their hotel back to my home, so we can file that one under “never again”. Should have just taken the train.)

The next afternoon I picked up the rental car and got ready for a quick highland jaunt with my Californian visitors.

I’d convinced them it would be worthwhile staying a night somewhere up in the Highlands and we so opted for Oban – right at the Pier.

So picking them up at Queen Street on the Friday morning, we headed to Loch Lomond.

We ended up spending over an hour in a traffic jam near the Bowling roundabout due to a horrific accident. Eventually we got to Luss, had a wander, some lunch and took some photos on the pier.

From Luss it was up to the Green Welly for a browse and a pit stop and browse. After Tyndrum, it was north to Glencoe Village Cafe to meet a fellow KDP-er the lovely Leeane!  That was a lovely flying visit and I vowed to return to spend more time with her very soon. 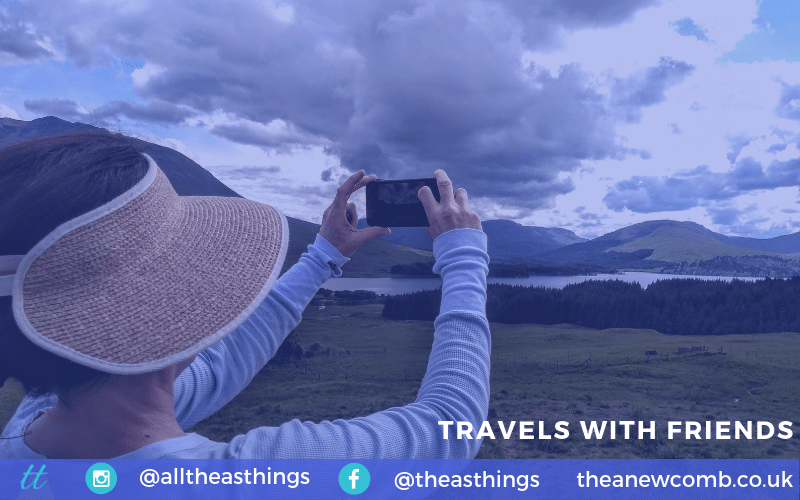 Around dinner time, we headed southwest toward Oban – stopping for several shots of Castle Stalker. It ranks as one of my favourite castles in Scotland. (It also ended up on one of my Scottish Travel notebooks). 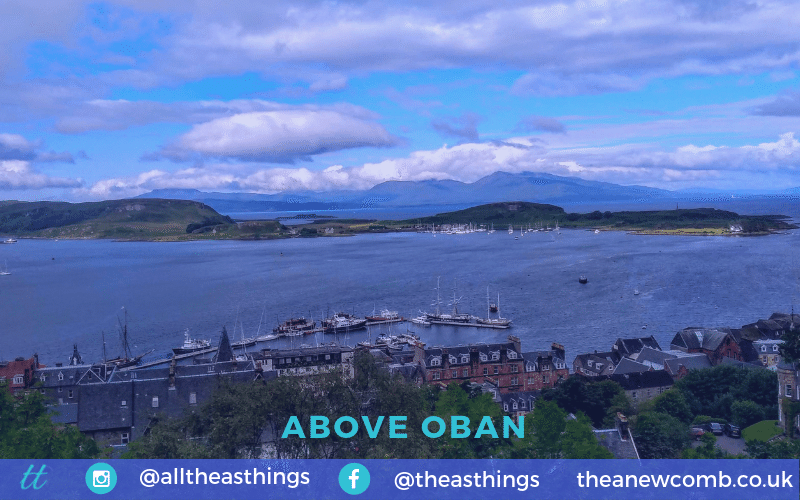 We eventually arrived at lovely Oban and were truly famished by this point. Sadly Eusk was all booked up for dinner, so we ate next door at the pizza place.

We had a great view over the water but were all too exhausted to even see straight. It was early to bed for us after that.

In the morning, on the way out of Oban we stopped at McCaig’s Tower for some photo ops.

Incidentally I’m looking forward to return to Oban soon to deliver the Canva workshop in November….See Business Gateway for details if you’re near… 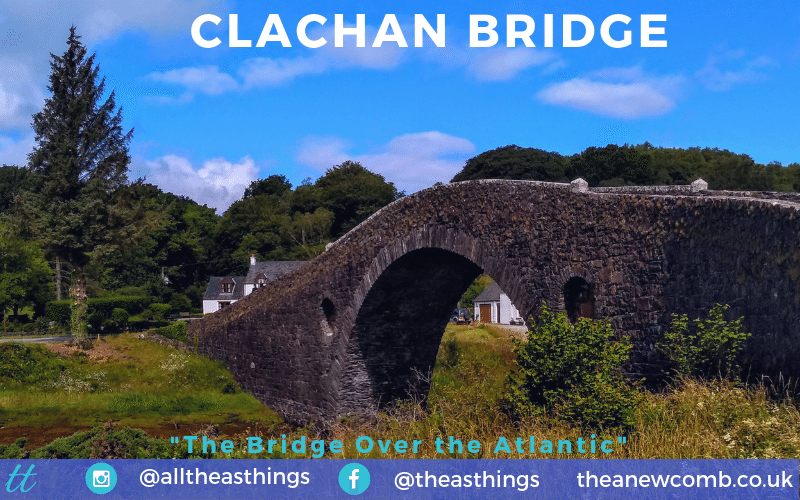 On the way down the road back to Glasgow, we made a wee detour to the “Bridge Over the Atlantic”.

I’ve been there several times now, and it never serves to disappoint. It’s too cute. Check out this drone video of it….

Continuing down the road we stopped for lunch at Inverarary, (the George which is always fabulous) and the Rest and Be Thankful too.

We made it back in time to return the car before they shut and I drove them to the train station and off they went. I guess that was enough Thea time…

Well, it’s a bit of a cheat to be honest with you, but I returned to Aberdour to the Woodside Hotel (which has become a sort of home away from home in 2019). My East Coast home as it were.  I always enjoy a bit of time up there. It’s a quaint village, the people are nice and I like the beach too!

The day after my stay, I attended an Amazon Academy event in Dunfermline. It was not the best of events, as in I didn’t get much out of it, but it was interesting to see the giant warehouse which is the equivalent of something like 17 football pitches (or is it 31?)

Whatever. It was massive.

As I’d already been there previously, I didn’t feel I could use a place for my challenge for a second time. So not counting Aberdour, I welcomed an opportunity for another break.

As luck would have it, I got the invite to the Ayrshire Business Women’s 25th Anniversary celebration at Trump Turnberry – it seemed only right to make a night of it.

Now of course a night a the luxury resort was out of the question (beyond my means), so I chose a farmhouse not too far away, near Daily. 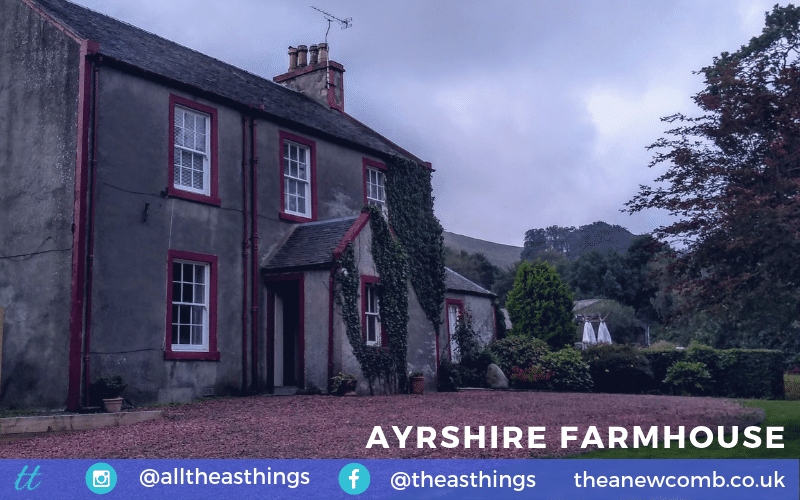 Once the Ayrshire Business Women’s event ended, I headed to check in and then straight back out to the beach at Girvan. It was a glorious sunny as I wandered along the beach…water lapping around my toes…

Eventually I grew tired and nipped around the corner to the Small Fries chippy on the main road.

By the time I drove back around to the harbour to eat my supper, the fog was so thick, not only could I not see Ailsa Craig anymore, I couldn’t even see the white lighthouse type structure at the end of the harbour.

Man that fog rolled in FAST!

Once food was done, I headed back to the B&B for a shower and an early night. It was strange to hear how deathly silent it was compared to my home along side a busy motorway.

In the morning, I headed out the back roads toward Daily and up to Pirleyhill Farm – where the new glamping pods will be going in. Visited with owner Stuart, for a wee while, then we attempted to fly the drone that I had bought myself for my birthday. We had a laugh but after a few frustrating crashes, it time to head home.

It was one of the shortest breaks away this year but also a good few days away.

Now it’s back to work and booking workshops, one-to-one clients and of course full steam ahead on my sidehustle.

All time is spent concentrating on getting good content up on Amazon KDP and Merch for Q4. Really looking forward to it.

See you next time on my following summer travels into Fall. Thanks for stopping by. See you after the next trip!