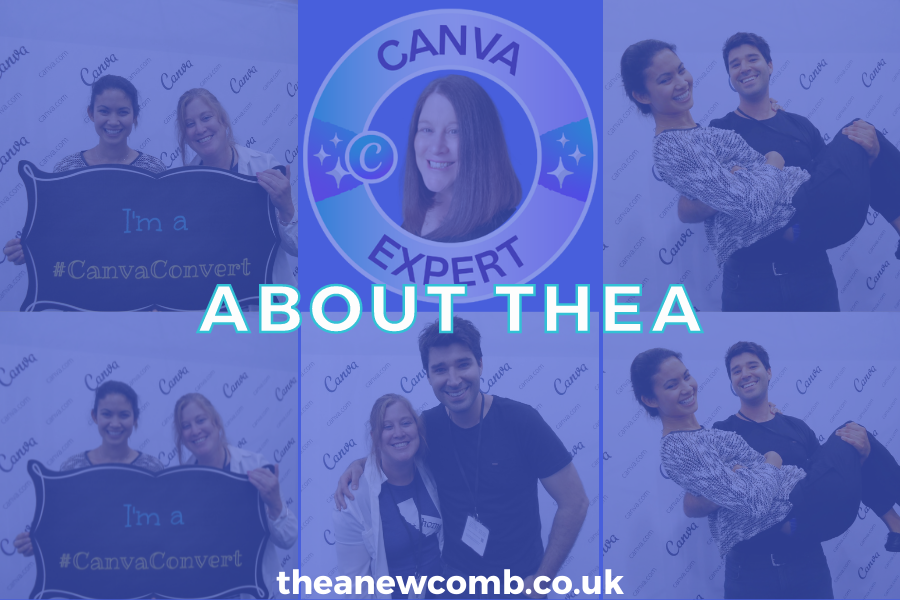 Hey I am Thea, a verified global Canva Expert (one of 20 in the world!) I train small groups, sometimes 1:1, through live sessions in person or online globally.

Just a quick rundown on my career to date starting with graduating from a university in Northern California with a degree in Communications BA (emphasis on radio). Following that, I moved to Scotland in the summer of 1992. First job here was presenting radio shows on a brand new station Q96.

Soon after that I built my first website (in notepad, from scratch) circa ’95.

Over the last three decades, I’ve never been far from working in the digital and media spaces, in one capacity or another.

Below are some other bullet points on my career timeline – so far.

My main side hustle is POD or print on demand. It’s basically content creation in the form of “merch” (merchandise) which generally means:  tshirts, mugs, stickers, and other merchandise. At the end of January of 2019, I began my KDP journey – creating notebooks, journals, planners, sketchbooks and so forth via it’s Kindle Direct Publishing platform. I co-run a Facebook group with my friend James – it’s called Merch Across the Pond and is for UK people doing print on demand.

In 2015, I relaunched a monthly networking event in Glasgow called Southsidiers in Business. A few years later after it changed hands I few times, in November 2018, I rebranded it First Wednesday Networking in Glasgow but since Lockdown it’s all done online and open to business owners and professionals Scotland-wide. If you wish to attend it takes places every First Wednesday online via Zoom. (click to RSVP).

If you’d like me to deliver some Canva training for your team, group or staff, then please get in touch via this website. Or get in touch via Twitter or Instagram. While I have a FB page as well, I seldom check messages there!

PS: Oh and before you go, head over to my links page for all my top recommended tools and creative resources…